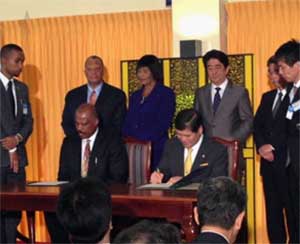 TWO students from The University of the West Indies (UWI) Open Campus Sites in Montserrat and St. Vincent and the Grenadines will join six other UWI students from UWI traditional campus countries in January 2016, to participate in an exchange programme with Sophia University in Japan.

The Open Campus students are Ms.Denecia Campbell from Montserrat and Mr. Ricky Haynes from St. Vincent, both registered in the BSc in Banking and Finance programme. Both students met eligibility requirements for the exchange programme and were the successful ones out of the 10 students who had applied.

The UWI Open Campus says it is pleased to be a part of the University’s thrust to expand its global presence into Japan through this new partnership with Sophia University in Japan.

In an earlier release from the University, it was disclosed that UWI Vice-Chancellor, Professor Sir Hilary Beckles and President of Sophia University in Japan, Takashi Hayashita, signed a memorandum of understanding (MOU) on September 30, 2015.

This MOU aimed at enhancing bilateral relationships that will in turn enhance research and education at both institutions, while expanding the spectrum of academic collaboration and cultural awareness between the universities.

Grounded within the context of long-standing relations between Japan and the countries within the Caribbean Community (CARICOM), along with the Government of Japan’s commitment to further strengthening its relations with CARICOM, the agreement outlines several areas for academic, scientific and educational cooperation.

In addition to the exchange of faculty, scholars and students at all levels, the MOU commits to developing and implementing joint research programmes in areas such as sustainable development, climate change, marine biodiversity and the blue economy, and the application of technology to drive economic development.

Dr. Luz Longsworth, Pro Vice-Chancellor and Principal (Ag.) of The UWI Open Campus, states that this exchange will serve to enrich both institutions greatly and is a chance to expose students from non-traditional UWI country sites to the collaborative undertaking of education, professional training, distance learning, and research and institutional development for the benefit of Caribbean nations, and the two universities.