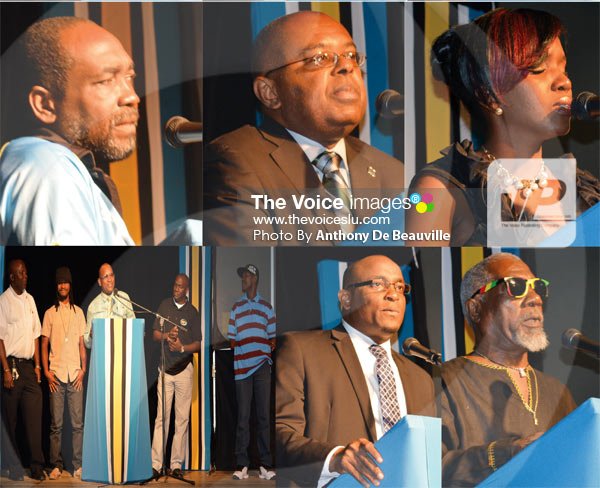 Hundreds of well-wishers from near and far, government officials, family members and representatives from a number of national sports organizations and clubs will converge on the Beausejour Cricket Ground tomorrow for the final farewell for well-known RSL sportscaster, Brian Mc Donald.

The 43 year old Mc Donald passed in Soufriere following a massive heart attack on Sunday January 17. His body will be laid to rest at the Gros Islet cemetery.

Meanwhile, there was only standing room available this past Monday evening at the National Cultural Centre as the tributes continued to pour in for the former RSL sportscaster.

Members of the various media houses, staff of RSL, family, well-wishers and friends came together for what can best be described as a touching memorial tribute.

From the very first speaker to the last individual there was no shortage of love, warmth and anecdotes being poured out on the life of Mc Donald who gave 24 unbroken years of service of sports journalism.

Chairman of RSL Joseph Maxwell said. “He was a sportscaster par excellence. He impacted the lives of a lot of people through sports. I am sure it will be fitting the tributes that will show the life that he lived.”

Irvin Springer, Mc Donald’s school mate and friend from the RC Boys class of 84, St. Mary’s College class of 89, and Sir Arthur Lewis Community College class of 91, said, “One of the first activities we signed up for was the Club Scout Movement. This is where Brian started one of his behavioural traits which he practised up to his death. As a scout we went on a number of hikes and attended many camps. Brian took this beyond the scout troop and incorporated it into his everyday life”.

KebaTaliam said of Mc Donald: “He can best be described as an unassuming giant, a man who was secure of himself to be content with remaining on the periphery of the spotlight where many seem to be basking while expanding every effort towards performing his best. He was genuine, encouraging, trustworthy and dependable. One of the most admirable qualities of Brian was his commitment to his work. It never mattered where on island a game was being  played, or what time it was being played, Brian would be there to cover it. If he could not be there to cover it, be assured he had a contact to give him the results.”

Chairman of the Iyanola Council for the Movement of Rastafari Henry Pierre said, “Brain hosted Reggae Vibes and during the programme he was extremely helpful in assisting the Council with publicity for most of its major activities and for that we are forever thankful”.

President of the Media Association Clinton Reynolds said, “Our paths crossed in 1995 when Radio St.Lucia reopened in June after a nine month closure. Brian was the only one retained in the sports department. It was a very young and inexperienced team at the time. We had a great thing going on in the news room back then. He became a pillar of RSL for 25 years. All of us who knew Brian know that he loved sports. It was his passion and he went to great lengths to perfect it”.

Minister for Broadcasting Jimmy Fletcher said: “Brian Mc Donald can best be described as a man for all seasons. When you hear of the history of RSL some names come to mind – Barbara Jacob Small, Margaret Robert Steele, Andrew Vaughn Noel. The name Brain Mc Donald I think is etched in the walls of RSL. He really epitomized excellence, he belonged to an era that unfortunately is dying”.

St. Lucia Olympic Committee General Secretary Alfred Emmanuel said: “It never dawned on me at the SLOC that Brian Mc Donald was the 2nd Vice President of the St.Lucia Boxing Association, not until his death. I always saw him as the secretary of the SLBA, because over the last five years every piece of correspondence was under the pen of Brain Mc Donald. Brain was the manager of many boxing delegations leaving the shores. At the time of his untimely passing he was in discussion with the SLOC preparing for an Olympic qualifier to take place in Argentina in March. The paper work for such a qualifier was at an advanced stage. I can recall on Friday when he came to the office to ensure that the submission was in order for that trip to Argentina. He was a committed boxing administrator, committed to SLBA and the boxers he managed both here and overseas”.

Blackheart Production CEO, David Christopher said: “Brian was a very extraordinary kind of guy, but very private; a brother, he will put his hand in fire especially for me. He had a vision; he had a strong mind, will power and ability. He always said that boxing would bring the first major gold medal to St. Lucia and he was working towards it. When we went out on overseas tours he was manager, but he ended up being the coordinator of the event because he always knew what was going on behind the scense”.

Minister for Youth Development and Sports, Shawn Edward said; “He was the voice of many; I am not a media expert, but one thing I know, a lot of clubs and sports councils that do not have very good public relations programmes relied on Brian to get their story out and one thing we must credit him for, he was able to bring the sports journalists from the Voice, The Star and HTS together to cover sports in the Mabouya Valley. He was known all over St. Lucia”.