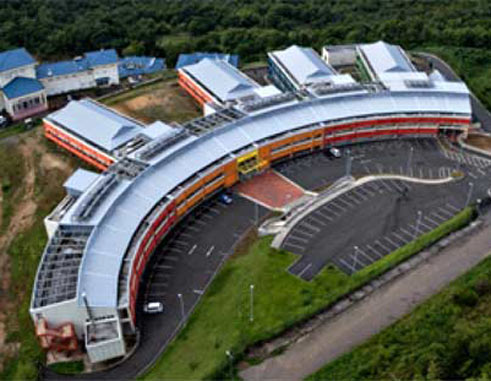 E.U.–funded Facility To Open This Year.

THE new European Union funded hospital on the Millennium Highway will open its doors for business later this year and will officially be named next month.

Health Minister Alvina Reynolds and Permanent Secretary in the Ministry of Health, Cointha Thomas have both confirmed this.

“Yes! Definitely we are going to open this year,” Minister Reynolds said.

The hospital, which cost in the region of EC$150 million with the European Union putting up most of that money, will be named the Owen King EU Hospital, after the famous St Lucian surgeon who was well known throughout the Caribbean and beyond. He died in May 2013.

The naming ceremony will take place during next month’s celebrations marking the country’s 37th anniversary of Independence.

An unofficial transition of sorts from old Victoria Hospital to the new hospital has already begun and involves the movement of equipment and furniture and the training of technicians and other staff.

Minister Reynolds noted that the official commencement of the transition will begin soon but refrained from giving an actual date.

However, Thomas said that while the transition had begun some time ago, “We will be announcing a day for the actual moving of the patients at Victoria Hospital to the new hospital,” adding that the patients would be moved by ambulance.

As to the future of the century-old Victoria Hospital, Thomas said: “What will happen is that the Castries Health centre operations will now move into Victoria Hospital with some additional services and longer hours.”

Victoria Hospital will be transformed into a polyclinic serving Castries. However, while the operations of the Castries Health Centre would have folded at four o’clock in the afternoon, operations at the new Hospital Road polyclinic would go around the clock.

Thomas said that before all of this could come on stream Victoria Hospital must be decommissioned. But she did not say when this will be done.

“The activity will escalate within the next few months as we instal all the equipment and furniture in the (new) hospital,” she said.

Said to be first conceptualized in 1987, the new hospital’s sod turning ceremony actually took place in 2009 and was to have been completed within three years.

This was not to be as a number of factors, both local and international, delayed its completion.

Adding to that was Saint Lucia needing to fulfil its part of the agreement with the European Union before the latter could release all of its promised assistance. Saint Lucia had to show its preparedness to construct the hospital’s kitchen, laundry room, cafeteria, car park area.

More negotiations were to follow between the Government of Saint Lucia and the European Union to settle legal issues that propped up after the last general elections that led to an European Union delegation having to come down to the island.