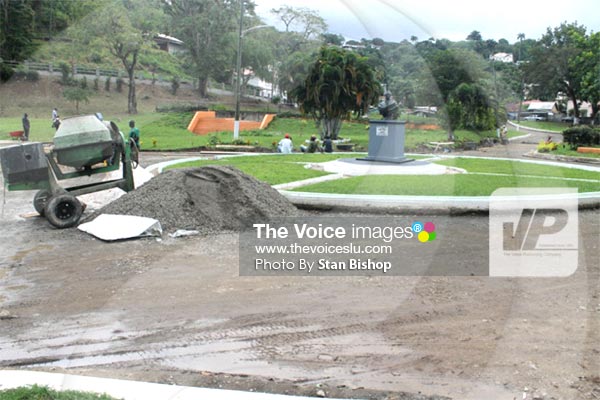 Sponsored | Article continues below
Share this post:
THE George V Park in downtown Castries seems to finally be receiving the infrastructural upgrade it has needed for years now.
For the past few weeks, about a dozen workmen have been seen undertaking restorative works at the popular city recreational park. These works include road improvement and drainage to the park which is situated between Darling Road and Chaussee Road.

Rehabilitative works began in earnest after a tree fell and damaged a Route 1A bus on Darling Road. Castries Mayor, Shirley Lewis, visited the area a day after that incident and the cutting down of several trees followed due to insects burrowing in their trunks.

The main walkway leading from the park’s Darling Road entrance to the bust of Charles Eugene Gabriel de la Croix (Marquis de Castries) in the centre of the park was later repaved.

When The VOICE visited the park yesterday, about a dozen workmen were seen digging drains and pouring cement as they continue works near the roundabout and the walkway leading to the park’s Chaussee Road end.

A few years ago, a plan by the Castries Constituency Council (CCC) and the Saint Lucia Archaeological and Historical Society was formulated to bring relief to the area. However, both agencies told The VOICE yesterday that they were not responsible for the works now in progress.

An unrelated source told The VOICE that the project is being sponsored by the Caribbean Development Bank (CDB) and that Prime Minister Dr. Kenny Anthony and a team of project officials toured the site last week.

Over the years, George V Park has blew in a state of disrepair, falling prey to vagrants and misuse of the facilities, such as motorists parking their vehicles in the park. Even the benches became dilapidated, forcing many people to use George V Park as a shortcut.

Some years ago, there was a heated debate as to whether the park should be transformed into a central bus terminal, thereby freeing up the city which is home to several bus stands. But with the new life now being breathed into the George V Park, it seems likely that the area would in some measure be restored to its glory days.