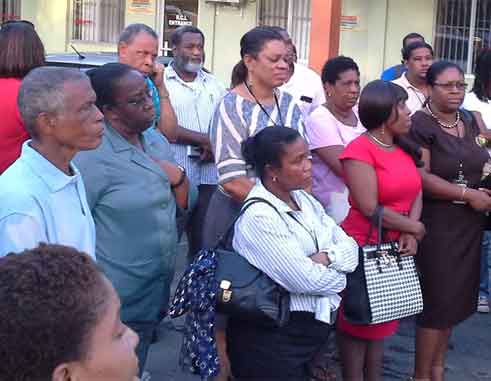 AN April 27 Biennial Convention of the Civil Service Association (CSA) may very well be one of the most important conferences ever held by the Association as it attempts to fight off mounting pressure from within that escalated this week at its headquarters in Sans Soucis.

The Association’s General Secretary, Wilfred Pierre Wednesday stymied a move by the breakaway faction known as the Save Our Union (CSA) Team (SOUT) by dismissing staff an hour earlier and locking the building so that the SOUT would not get access to hold an extraordinary meeting members, had called for.

“The building was locked so as to avoid a potentially uncomfortable atmosphere that could have resulted in unnecessary confrontation with the SOUT members,” Pierre said.

The action by Pierre was somewhat expected after the Association’s President Cletus Cyril told reporters the day before that the Executive Council had not scheduled any meeting with members on the day the SOUT stated that an extraordinary meeting was to be held.

“Every time we seek to take government to task on a matter facing our members we are attacked by the Save the Union group,” Cyril said Wednesday.

Members of the SOUT have been trying to dislodge the National Executive Council for more than a year now citing what they claimed are violations of the Association’s Constitution by the Council.

Particular members on the Council have been the target of the SOUT, especially its General Secretary Wilfred Pierre whom the SOUT has associated with multiple violations of the CSA’s Constitution.

With the aborted extraordinary general meeting Wednesday which Pierre had earlier called “unconstitutional”, members of SOUT’s only chance of venting their frustrations with the present executive is at April’s Biennial Convention, one that promises to be disruptive, if previous meetings sanctioned by the Constitution are yardsticks to go by whenever members of SOUT and the National Executive Council face each other.

Pierre is aware of the boisterous atmosphere the biennial convention could most likely generate into stating that while it may give the meeting a bit more flavour he hoped that more members would participate in the decisions that will be taken at the meeting.

This latest disturbance at the CSA stemmed from an agreement between the SOUT and the CSA’s executive last September to hold a meeting, which was not sanctioned by the Labour Department, as required.

Pierre maintained that was not for an extraordinary meeting as outlined by the CSA’s Constitution but the SOUT thinks otherwise.

Labour Commissioner Ray Narcisse on January 8 of this month issued an order for the holding of an extraordinary meeting, which the SOUT says was another order to Pierre and his team to hold the meeting that was agreed on back in September of last year.

Pierre, in a letter to Narcisse Tuesday said that order seriously contravened Section 6.9j of the union’s Constitution which forbids the holding of an extraordinary meeting within four months prior to the holding of a Biennial Convention.

Narcisse yesterday said that the Labour Department will deal with the present situation within the CSA.

Meanwhile the locked doors of the CSA building at Sans Soucis on Wednesday did not deter the scores of SOUT members who turned up for a meeting. An impromptu gathering was held on the grounds where those in attendance vowed to continue calling for the upholding of the provisions of the Constitution. They called the action taken by Pierre to lock the building as a violation of their human rights.

Supporters of the SOUT have sent out email messages taking the CSA executive to task for Wednesday’s incident. One said: “ Today was a historic one in the history of the 62 year old St. Lucia Civil Service Association (CSA) when some financial members were barred from holding a meeting to apprise members of the state of the filed petition for an extraordinary general meeting to remove the unlawful executive members, the request to inspect the books of accounts, and the group medical insurance with SAGICOR and the executive’s deal with NAGICO.

“Members agreed to continue to pursue justice via our legal system, and were advised to resist the urge to emulate the unlawful/unconstitutional practices of the hijacked executive”.