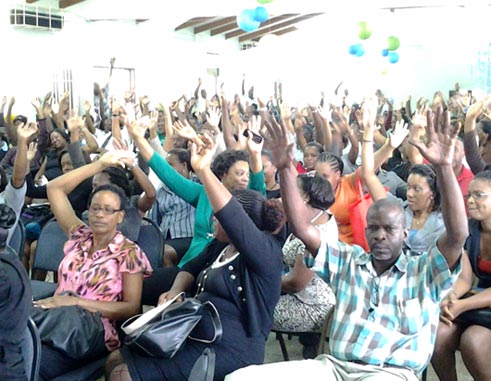 THE relationship between the Civil Service Association and that of Labour Commissioner, Ray Narcisse are under severe strain following several decrees recently handed down to the former by the latter.

Now the CSA is responding saying that the Commissioner has acted in haste, and contradicts himself when dealing with matters presented to him by a handful of its members calling themselves “Save Our Union”.

What has irked the CSA is an order by Narcisse to the CSA to hold an extraordinary meeting this month as called for by the members calling themselves ‘Save Our Union’.

This group has been at loggerheads with the executive of the CSA for quite some time ever since former President Mary’s venture into party politics by aligning herself with the opposition United Workers Party, become a party senator in the process.

“It must be pointed out that the Labour Commissioner should have been fully aware of the provisions of the Union’s Constitution, given the fact that he was the one, who in October 2013, in his capacity as Registrar of Trade Unions approved our constitution,” Pierre added.

Another matter in which Narcisse appeared to have acted in haste or contradicted himself, according to Pierre took place last year, Pierre said, when a staff member of the CSA’s Secretariat was directed to proceed on vacation after accumulating a number of days, as is the norm in the government service.

Pierre said that instead of taking vacation as directed the staff member returned to work without reporting to him, the general secretary stating that the Labour Commissioner had ordered her to return to work.

“Our union was stunned by Mr.Narcisse’s instructions to our employee and view his directives as wielding his big stick on our Association for reasons best known to him. A meeting was immediately convened with Mr.Narcisse at which our union’s position was factually stated for directing this staff member to proceed on vacation. Having laid our facts and reasons on the table before the Labour Commissioner, he rescinded his order and ordered this staff member to re-proceed on her vacation,” Pierre said.

“It is very, very sad and unusual the manner in which the Labour Commissioner has acted…..,” Pierre said.