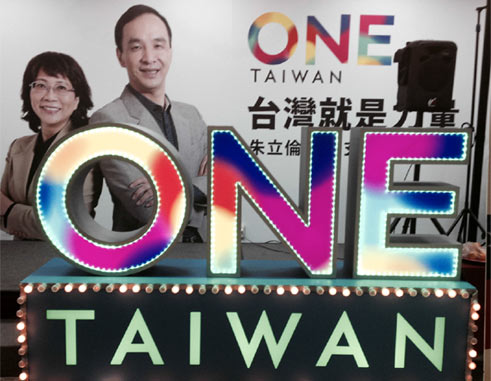 Taipei, Taiwan:– The two major parties in Taiwan have gone back to the drawing board following last week’s presidential and legislative poll, one rethinking, the other regrouping, as both start to get ready for transitional regime change in four months.

The opposition Democratic Progressive Party (DPP) thrashed the ruling Chinese Nationalist Party (Kuomintang or KMT) on January 16, paving the way for the DPP to start its second coming, this time in full power, with control of both the Presidency and the Legislature.

But although the pro-independence DPP enjoyed an eight-year reign from 2000 to 2008 under President Chen Shui-bian, it didn’t end in circumstances that made the party proud. Chen was later found guilty of and jailed for squandermania as he pursued a vigorous and eventually too costly policy of ‘check book diplomacy’. In several cases too, top former government officials in some states that had been encouraged to dump China for Taiwan under Chen’s watch have been prosecuted for mishandling and/or misdirecting Taiwan financial assistance not meant for their pockets.

Chen led the DPP’s break the KMT’s decades-old monopoly on the absolute power it held since 1949. But his protracted confrontational stance with Beijing turned out to be more of a hindrance than a help. At the end of his and the DPP’s reign, Taiwan was in more of a breezy tailspin than flowing with the wind.

Dr Tsai Ing-wen, the first woman leader of the DPP, took up the pieces. A Western-trained lawyer and economist who negotiated Taiwan’s entry into the World Trade Organization (WTO), she rebuilt the DPP’s fortunes. An academic trained in the UK and the USA, she targeted the universities. She advocated “the internet of things” and led the DPP to dominate the social media. She built a base among the youth and attracted the now generation.

Ms Tsai had led the DPP into an earlier scorching victory against the KMT in municipal elections last year — and from then she became a double-digit front runner in all polls. So confident was the KMT that she was a humungous challenge that it quickly withdrew and replaced its earlier presidential candidate Hung Hsiu-chu, also a woman.

Tsai led the DPP to break the back of the KMT. But she’s quite aware — as she noted in her victory rally speech the night the better-than-expected results were announced — the next sunrise marked the start of the process of meeting the great challenges that came with the great victory.

More than a century old, the defeated Kuomintang is by no way dead. This is only its third loss of power – and only through elections; and it has the stamina to live to fight another day for all of the next four years.

Over the past six decades it has become rooted in Taiwan society, with entire families having historical attachments to it. Millions of its supporters trace their ancestry to mainland China’s Xiamen City and other parts of its coastal Fujian Province.

The KMT is a formidable national institution. But it is also subject to the decisions of an electorate. Still deeply rooted among elders and strongly influenced by their traditional thinking, the KMT has admittedly alienated itself from the Taiwanese youth.

It also consistently lost support in the last three elections. President Ma was eventually seen as too gentlemanly for the likeness of the traditional tough KMT ruler; and his initiatives to mend ties with Beijing through peace and dialogue were translated by the opposition as back-peddling on the party’s historical hostility to the mainland.

The KMT maintained throughout the campaign that strengthening of Cross Strait ties through 23 cooperation pacts and generally smoking the peace pipe with Beijing was the right thing to do. Apart from deepening Taiwan’s economic links to the mainland economy, it assured Beijing it would not pursue independence, was not interested in a merger with the mainland and was not interested in going to war with its bigger and more powerful neighbour.

Both parties were decidedly mum during the campaign on what their respective policies toward China would be, should they win. But both also tacitly admitted before the poll that each would have had to revisit their positions and policies following the expected results.

The DPP has indicated it will engage in a “South-bound Policy” to develop closer economic ties with Southern Asian neighbours, as well as build stronger ties with the European Union, to de-emphasize Taiwan’s reliance on both China and the USA.

President-elect Tsai has also strongly hinted she is prepared to flex her muscles at Beijing. Already being touted by friends as a likelihood of an Asian Angela Merkel, she says she rejects the 1992 Consensus on which the closer ties with Beijing were built under the KMT. She also wants to renegotiate the agreements entered into by Ma.

But Dr Tsai has been strongly warned by all of Taiwan’s major allies – the USA, Canada, the European Union, Australia, Japan, Singapore, etc – that she should do everything to preserve regional peace by not rocking the boat or provoking Beijing. She insists, however, that Beijing must consider the strength of her mandate “and respect Taiwanese democracy”.

Between now May 20, Dr Tsai and her party will also have to craft immediate plans to address existing challenges at home — and chart a safe path through the turbulent waters on the global horizon.

Apart from walking the delicate tightrope of Cross Strait ties with an understandably skeptical Beijing, the incoming President will be expected to take office in four months with workable plans for the economy, social welfare, parliamentary reform, energy and national security.

The KMT, on the other hand, will definitely have to press its re-set button and recalibrate its engines. Elderly Taiwanese are dying with the KMT’s vote, while the DPP is embracing the new voters attracted through the social media.

With most of its leaders past sixty, the Kuomintang will have to find new and younger leadership – and ways of developing its own “cyber warriors” brigade, as did the DPP under Tsai.

Between now and May 20, Taiwanese cannot but expect the unexpected. Outgoing KMT President Ma will still be in office until then — and will be forced to contend with an expectedly hostile legislature as of February 1. Besides, President-elect Tsai has played her cards extremely close to her chest and it’s everyone’s guess that, buoyed by her solid victory, she’ll flex her muscles at Beijing very early in her day.

But the stoic academic, economist and lawyer, graduated with an LL.B from National Taiwan University, an LL.M. from Cornell University Law School (USA) and a Ph D from the London School of Economics (LSE) also comes with much experience in government, having served both KMT and DPP administrations.

Dr Tsai was Minister of the Mainland Affairs Council (MAC) under Chen and served as Vice Premier until 2007, following which she was elected DPP Chairperson (Leader) in 2008 and in 2011 became the first female presidential candidate of a major party in Taiwan’s history. She was defeated by Ma in 2012, but stayed on at the helm to rebuild the DPP into the effective political machine that swept the polls last Saturday.

Her critics predict she will return Cross Strait relations to “the ice age” and the KMT is already predicting that if she fails to deliver in her first four years, it will definitely be back. But the uncertainty that’s so far ensured that no one has yet been able to say what she’ll actually do when she takes over is exactly what Ms Tsai cultivated throughout the DPP’s long campaign.

She’s keeping the world – and Beijing – guessing. But only for now…

It’ll all change when Taiwan’s first lady leader takes the queen’s throne at the national palace and in the Legislative Yuan in Taipei, in just four months time.

(Earl Bousquet was in Taiwan for the June 16, 2016 Presidential and Legislative Elections and penned this report exclusively for The Voice.)