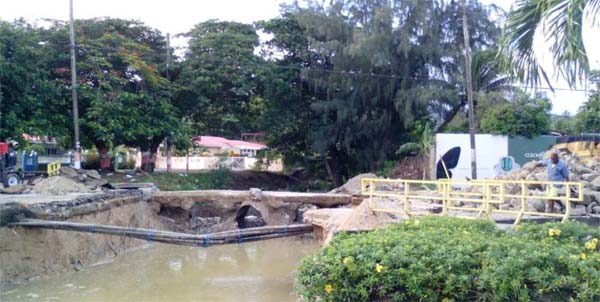 MINISTER of Infrastructure Philip J. Pierre says his Ministry is working diligently to reconstruct a section of the Castries/Gros Islet Roadway that collapsed last Friday.

The roadway collapsed less than 24 hours after authorities cordoned off a visible depression on the road surface. Investigations revealed that the collapse was due to failed culverts beneath the roadway.

“By 2:00 p.m. on Friday a large hole in the road surface had [appeared],” Pierre explained. “[After] further investigations it became apparent that the ARMCO culverts in that section of the roadway had collapsed and would need to be replaced immediately. Technical personnel were summoned to urgently prepare designs and cost [assessments] for a new concrete culvert to replace the failed ARMCO culverts. Plans were finalized on Saturday for work to commence that evening for the construction of a new concrete reinforced culvert in that section of the road.”

The minister appealed for tolerance with regard to the traffic diversions in effect during the construction phase.

“We would also like to appeal for the patience, cooperation and understanding of the motoring public, businesses and all others who will be affected as a result [of the construction work]” he said. “We are working assiduously to reopen the roadway in the shortest possible time frame.”

Signs have been erected along the routes to indicate the traffic diversions in effect.

For commuters using public transport, the Gros Islet Mini Bus Association will conduct a joint shuttle service from Castries to the Rodney Bay Mall; and from the Rodney Bay Mall to the town of Gros Islet. Other buses to and from the town of Gros Islet will use the Monchy and Bonne Terre roads. There will be no change in bus fares. Each bus will be identified for the service it provides.