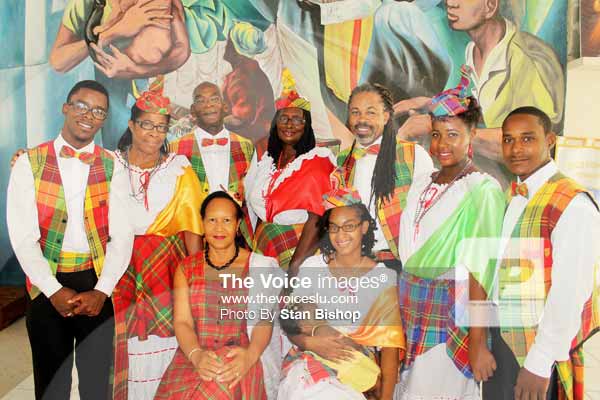 FOR many people, the Helen Folk Dancers and the Les Danseurs Traditionneles de Ste.Lucie are but the only quadrille groups shaking their legs to an infectious, traditional musical beat. But there’s a lesser-known group that’s been around for quite some time now that’s aiming to make a big name for itself – not just locally but internationally. Enter the Claralites Folk and Traditional Dance Group.

The group was formed by Choiseul native, Clara Edwards, in 1979 as a testimony to her strong belief in the importance of Saint Lucia’s cultural heritage. Since the group’s inception, Edwards, a retired teacher, has been working assiduously to ensure the continuation of the quadrille culture through her group.

Today, 65-year-old Edwards serves as Vice-President and Dance Director of the Choiseul-based group and is also the founder of two of that west coast community’s La Rose and La Marguerite groups.

Hattie Barnard is president of the Claralites Folk and Traditional Dance Group which is made up nearly 50 members who perform at various events across Saint Lucia to keep the cultural tradition going. Barnard said that quadrille ceased being part of the school curriculum in the early 1990s. Given its cultural significance, she believes it should be given another chance on the school syllabus.

“It’s very important that quadrille is passed on so as to reflect our identity as a people. I think that quadrille is not as popular now as it once was because it’s not being taught in schools. Everything must start with the children,” Barnard said.

Barnard explained that Edwards’ earliest interest in traditional dance was through her mother who used to take young Clara to La Marguerite, La Rose and other cultural events. After learning the traditions, Edwards decided to teach them in later life. Parents and teachers, Barnard insists, need to encourage children to plant their roots firmly in their cultural traditions.

“If the children are not inspired by this type of dance, then they’re not going to know about,” British-born Barnard, who settled in Saint Lucia in 2006, said. “That’s how it’s going to die, which is one of the things that worries Mrs. Edwards.”

Listening to quadrille music, Barnard said, “reminds me of a time and place that no longer exists.” Reaching back into the past, she explained how our ancestors adapted cultural music based on what their slave masters used to dance to.

“It was mainly the 18th- and 19th-century elite who danced to quadrille music. The slaves adapted it as a form of expression and communication whenever they didn’t want the slave masters to know what they were talking about,” Barnard explained.

Among the 36-year-old group’s many aims is attracting more young people to the group, Barnard said. However, one of the hiccups is that everything is expensive, especially the traditional clothing. People also want to be paid for their performances because the group cannot always do charitable work. The challenges are so real that Barnard is now seeking wider avenues for the group’s success.

“Everything cultural in Saint Lucia must be nurtured,” Barnard stated. “That’s why I’m trying to see how I can explore things so that the group can get more exposure internationally.”