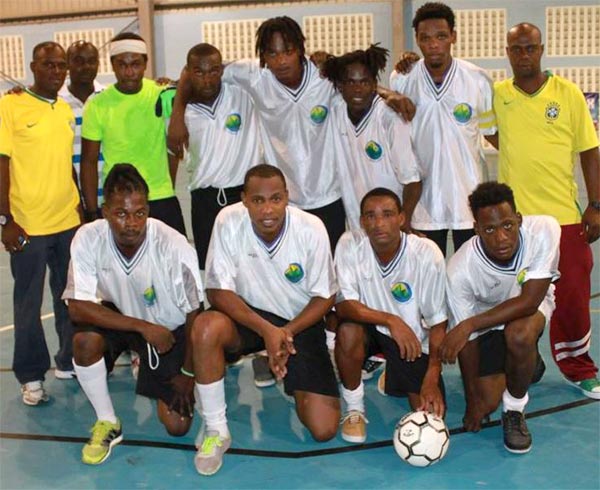 Two Games Down For Beausejour.

THE atmosphere at the Beausejour Indoor Facility is building as the participating teams in the inaugural RE Sports Futsal tournament will come into quarter final action tomorrow evening,.

The VOICE spoke with the man behind the scenes Lionel John, about the tournament and this is what he had to say. “Ronald Emmanus and I started a company call RE Sports essentially to promote sporting activities. We started with Futsal as it is a wonderful variant of football. Hence the reason we thought it was right to use the commercial houses as it is very easy for them to put a team together to play 5 a side”.

“The players are so enthusiastic about it because out of a squad of 15 you should get at least five or six quality players at anyone time on centre court to bring out some quality football. Futsal itself is relatively new to Saint Lucia and the players are really interested in reading about it and learning the rules. On a day to day basis we get calls. Even the referees are challenged to a certain degree because the players are actually paying very close attention to the sport and they find it to be very interesting and exciting”.

A total of 16 teams registered for the inaugural tournament and played each other in a round robin. Following the quarter final round on Friday the showpiece will move into its semi final and final stage. The top finishers will receive trophies, medals and a number of individual prizes. In addition, the organizers will be doing something different which is somewhat of a victory party for the winner. So there is no monetary prize to talk about.

Lionel said, “For now we want to keep it to Futsal. We do not want to move too fast into other sporting disciplines. We know that some of the sports are guarded so you need to move carefully into what you’re doing. We want to build it up properly; build up the RE brand and then we will think about branching out into other sports in 2016.”