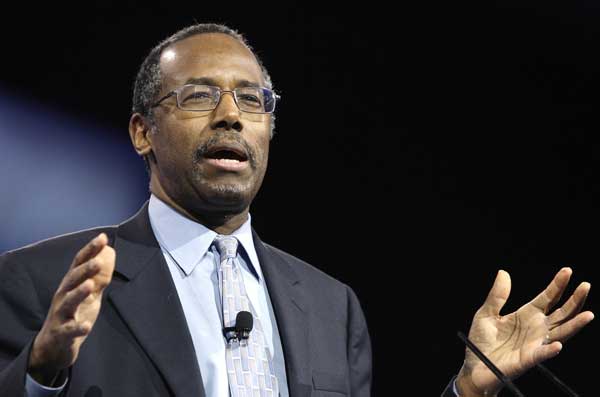 DR. BEN Carson, the 64-year-old retired neurosurgeon who is vying for President of the United States, couldn’t be more different from the suave and thoughtful Barack Obama, whom he has labelled a “liar” and “psychopath”. Until now, nothing I’ve seen or heard suggests that the good doctor has what it takes to be commander-in- chief of a superpower. Although people do sometimes rise to the occasion when circumstances require them to, Dr. Carson has so far been unable to convince me that he has the political intelligence and fortitude to be the world’s most powerful political and economic leader – and this, despite the fact that he is presently leading the GOP field according to recent polls, although the presidential campaign still has a long way to go.

What do you make of a presidential candidate who doesn’t seem to have thought through his economic and foreign policy positions and more often than usual resorts to scaremongering? Funny enough, the two candidates least qualified to lead the nation are those leading in the polls at the moment. Not only has the gaffe-prone Dr. Carson failed to provide any relevant detail of his future policies, he also seems to show very little interest particularly in broader economic matters, as his embarrassing lack of knowledge about the economy begins to manifest. Of late, his mistaken philosophy and off-script musings have begun to raise eyebrows.

If you’re going to run for such high office, you’d better be sure that you’re surrounded by smart people who are able to identify and analyze all the relevant issues, whether it be immigration, national security, taxes or foreign policy – and put together a viable plan that you as a candidate can explain to the public with little effort. I suppose the question now is, why hasn’t Dr. Carson immersed himself in the economic issues the American public cares most about including employment growth, support for the middle class, the cost of education and income inequality (among other things)?

I recently read an interview conducted by Kai Rysdal of Marketplace, a business programme, which revealed the specious reasoning behind Dr. Carson’s economic fantasies. When asked whether Congress and the President should raise the debt limit or default on the national debt, he equivocated: “Let me put it this way. If I were the president, I would not sign an increased budget. Absolutely would not do it. They would have to find a place to cut.”

Realizing that the good doctor had misconstrued debt limit for budget, the interviewer again clarified the question with the comment: “To be clear, it’s increasing the debt limit, not the budget, but I want to make sure I understand you. You’d let the United States default rather than raise the debt limit.” To which Dr. Carson replied: “No, I would provide the kind of leadership that says, ‘Get on the stick guys, and stop messing around, and cut where you need to cut, because we’re not raising any spending limits, period’… What I’m saying is what we have to do is restructure the way that we create debt.” Now if this sounds like Greek to you, it probably is – which of course reminds me of our own local political hopefuls who believe that we’re all gutless fools to be dazzled by minimalist, gut-punching gobbledygook.

Now I’m actually quite surprised that Dr. Carson has done so well both in a country where prejudice against blacks is nauseating and in a Republican Party that espouses racist and anti-immigrant policies. Not that I believe Dr. Carson will ever clinch the Republican nomination and become President. After all, there are still many intractable hurdles to be overcome, including winning acceptance from the die-hard conservative voters of the States of the Deep South as well as rural conservative whites. But even if Dr. Carson did win the nomination (only if), the GOP doesn’t seem to have a political fairy-godfather like David Axelrod (Obama’s former Chief Campaign Strategist) who can package (or repackage) a black candidate to increasingly sceptical white voters.

Recently, Dr. Carson made headlines for comparing abortion to slavery, and women who have abortions to slave-owners. On the American prime-time talk show, “Meet the Press”, he proclaimed: “During slavery – and I know that’s one of those words you’re not supposed to say, but I’m saying it – during slavery, a lot of the slave owners thought that they had the right to do whatever they wanted to that slave. Anything that they chose to do. And, you know, what if the abolitionist had said, you know, ‘I don’t believe in slavery. I think it’s wrong. But you guys do whatever you want to do’. Where would we be?”

Indeed, some had trouble comprehending how Dr. Carson could be leading the other candidates in the polls after saying something so outrageous and pointless. David French of the National Review was quite astonished that Dr. Carson had expressed “an entirely mainstream, pro-life view” that “most Republican politicians dare not utter.”

In his most recent book – “America the Beautiful: Rediscovering What Made This Nation Great” – he writes: “Many African-Americans voted for Obama simply because he was a black man and not because they resonated philosophically with his policies.” Doesn’t Dr. Carson know that African-Americans have had a deep affinity for the Democratic Party since the 1960s when Lyndon Johnson signed the Civil Rights Act?

It appears that whatever small supply of goodwill the good doctor had among black voters, has quickly dissipated after comparing the nefarious brutality of slavery with mundanely contested political issues such as abortion and healthcare. For good reason, African-Americans seem to take umbrage at any remarks that use slavery or similar historical wrongs to draw self-serving political analogies.

Yet, the controversy surrounding the thoughtless remarks Dr. Carson continues to make doesn’t only expose his lack of discretion, but has also caused his personal judgement and political intelligence to be called into question. According to the BBC, he has compared gun control, political correctness, the US under Barack Obama and the progressive movement in general to Nazi rule. In an interview with NBC, he declared that Islam was not consistent with the US Constitution: “I would not advocate that we put a Muslim in charge of this nation. I absolutely would not agree with that.” Apparently Dr. Carson is not aware that Article VI, paragraph three of the United States Constitution guarantees that “no religious Test shall ever be required as a Qualification to any Office or public Trust under the United States.”

For Dr. Ben Carson, Donald Trump, or any other Republican politician to suggest that someone of any faith is unfit for office is out of touch with the realities of American society and democracy. Hence, every citizen of the United States should be concerned that political hopefuls are engaging in and tolerating such blatant acts of religious bigotry. Through his own words, Dr. Carson has revealed his own personal inability to serve as President of the United States. When he says, “I don’t advocate any- body whose values and principles are not consistent with our constitution“, he may have been recklessly brandishing his ignorance of the country’s constitution and perhaps forgetting the historical racial bigotry of a nation that once turned on its own citizen, particularly the ethnic group of which he is part.

Dr. Carson has accomplished much in the field of medicine and is no doubt a role model to the African-American community and to the country at large. However, a commander-in-chief in today’s crisis-ridden world is expected to have a good command of the issues and demonstrate steadfast political intelligence. Anyone can grow up to be President, but not everybody is cut out to be President. As regards past African-American presidential candidates – if, according to Republicans, Barack Obama qualifies as the devil we know, Jesse Jackson – the devil we don’t know, then who the devil is Dr. Carson really?