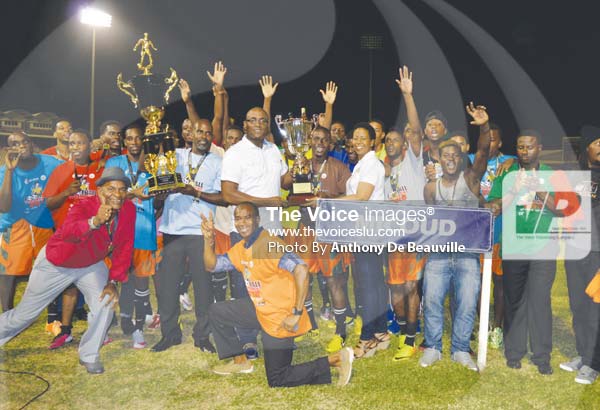 IN front of what can best be described as a capacity crowd on Saturday evening Micoud emerged champions of the Blackheart / St.Lucia Football Association Knockout Football Tournament played at the Beausejour Cricket Grounds with a 1-10 victory over Dennery.

The winning goal came from Defender Andre Alvarez Joseph in the 19th minute of the encounter when he met a right side corner which he neatly side footed to goal which goal keeper Alan Pinel had in his hands. But because of not taking the ball in the approved manner as a goal keeper should, the ball slipped through his legs and into the back of the nets to the joy of the Micound players and their hundreds of supporters.

It was all Micoud needed for victory as in the second half Dennery piled on the pressure, but Micoud defended stoutly and claimed their second ever Blackheart Knockout Football title having won in 2010.

The 2014 Champions Canaries finished in third place and claimed the $5000.00 cash prize and a trophy and bronze medals when they outplayed Soufriere 3-0 in the third place play off held before the final. with goals coming from Titus Shepherd .Antoine Wilfred from the penalty spot and Cassius Joseph.

For their fourth place finish Soufriere took home a trophy and $2000.00 in cash.

The monetary prizes and other major individual awards from the tournament will be presented at a special prize giving ceremony to be held next Wednesday 21 from 7.00 p.m. at the Players Pavillion lounge at the BCG.

Cornelius Butcher, head coach for the Micoud team made history becoming the first player to win the Blackheart Title as a player and Coach..

“I’m more than happy I have given 20 years of my life to football in Micoud and I cherish that prize today”, he said.

Butcher added, “Dennery came good in the second half. I have no idea what was said in the dressing room at the half time whistle, but they came out fighting, They wanted the equalizer but at the end that was not to be.

He noted, “One thing I can say, this victory will unite the people. The Politician’s cannot do that, my players just did. It will also boost the morale of the other footballers. There were players who believed I was too young to coach the team. There were players who could have made the final but, they chose not to train, but that was a lesson in life for them.”

“We are not stopping here. We resume training almost immediately and the intention is to go all the way in the remaining tournaments for 2015. We are greedy, we want titles, we want our respect, we want pedigree in our football”.