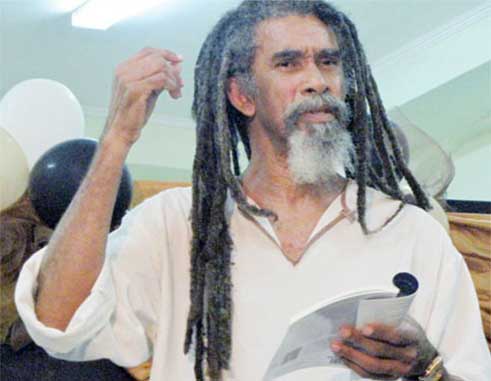 “THE arts can make us act, and we need action in response to the threats, the realities of climate change”.

These were the words from award-winning Saint Lucian poet Kendel Hippolyte, speaking at the launch of a Caribbean campaign on Climate Justice at the Orchid Garden here last Thursday evening.

The purpose of the campaign — dubbed #1point5tostayalive —is to raise awareness, momentum and popular support in favour of the Caribbean’s negotiating position in the lead-up to the 21st Conference of Parties (COP21) to the United Nations Framework Convention on Climate Change (UNFCCC) to be held in Paris in December.

“The Caribbean needs a legally binding global agreement that keeps temperature increases below 1.5 degrees Celsius above pre-industrial levels by the year 2100.,” he added.

According to the Minister, who is also patron of the campaign, the Caribbean also wants this agreement to provide adequate, predictable and accessible climate financing to support adaptation, mitigation and other climate change-related needs in poor and vulnerable countries, including small island states.

“These are pretty serious issues,” noted Hippolyte. “We need to tell the world what we feel and what we want”.

The poet, who has a long history of engagement in social and environmental justice, called on “musicians, painters, dancers, writers, all artists to become involved in this campaign by using their arts, their shows, their websites, their Facebook accounts and their concerts” in the coming weeks, to join the call of Panos Caribbean and its partners for Climate Justice for the Caribbean.

In particular, he called for participation in a weekend of action on October 31 – December 1, exactly a month prior to the start of the Paris Conference.

The ‘1point5tostayalive’ campaign is a joint effort of Panos Caribbean; Saint Lucia’s Ministry of Sustainable Development, Energy, Science and Technology; the Caribbean Community Climate Change Centre, the Regional Council of Martinique, and the Caribbean Development Bank.