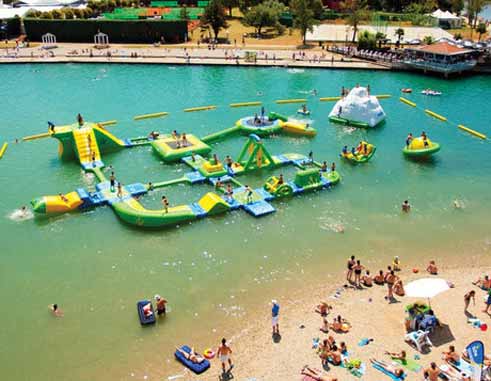 Splash Island is the Caribbean’s first floating open water sports park and is one of over 200 around the world manufactured by Wibit Sports out of Germany. It was conceptualized in March 2015 by Bay Gardens Director, Julianna Ward-Destang, a Chartered Accountant turned theme park entrepreneur who in addition to having the vision to create the Caribbean’s most exciting beach attraction in years, also has a desire to give back to her native St. Lucia and provide quality time and hours of fun for kids and kids at heart.

“In the month of August alone, we provided over 100 complimentary tickets to kids from the nearby Gros Islet community,” explained Julianna Ward-Destang, Splash Island Water Park Managing Director. As the newest member of the Bay Gardens Resorts family of companies which also includes Bay Gardens Beach Resort, Bay Gardens Hotel and Bay Gardens Inn, Splash Island has continued the Destang family’s tradition of giving back to the community.

September has so far been a month of giving and started with providing complimentary use to the water park for 20 young men from the Boys Training Centre, a juvenile rehabilitation facility located just 10 minutes away from the water park. “We wanted them to know that society has not forgotten them and to allow them to have some fun,” stated Ward-Destang.

The Holy Family Children’s Home also benefitted from free use of the water park that same week and the giving to the local community has not stopped there. Later this month, some lucky boys and girls who placed in the top 10 in the island’s Common Entrance Exam will receive two complimentary tickets each as a reward for their hard work.

Splash Island is also grateful to its many patrons and customers, 70% of whom have been St. Lucian residents so far.