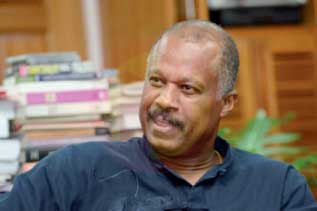 VICE-CHANCELLOR of The University of The West Indies (The UWI), Professor Sir Hilary Beckles will be specially honoured at the U.S Congressional Black Caucus Conference in Washington DC today. He will receive the Global Community Healer Award, a humanitarian award from the Community Healing Network (CHN) – a global grassroots movement aimed at uplifting black communities.

Sir Hilary is the second recipient of the award. The first being Maya Angelou, who was also the founding chair of CHN’s Board of Advisors.

Vice-Chancellor Beckles is currently in the USA on a visit which aims to strengthen The UWI’s global presence and impact. His visit began in New York City with a meeting with the Board of Directors of the American Foundation of The University of the West Indies (AFUWI), the principal link between the institution and its alumni and the Caribbean diaspora community in the United States, as well as American foundations and corporations with Caribbean business interests or Caribbean markets.

Dennis Walcott – met with Chairman H. Carl McCall, Chancellor Nancy L. Zimpher and other lead members of the State University of New York (SUNY), the largest comprehensive university system in the United States to advance dialogue on new and ongoing areas of collaboration with The UWI.

As his first official introduction to the wider New York community in his new role as Vice- Chancellor, Sir Hilary was also a guest of honour at AFUWI’s Golf and Tennis benefit. The event, hosted at the Hampshire Country Club, in collaboration with New York Giants Legend and Super Bowl Champion, Sean Landeta was organised to raise scholarship funds for UWI students. During the trip, which ends Saturday Vice-Chancellor Beckles is also expected to meet with executives of the Ford Foundation – an independent, non-profit, non-governmental organization, headquartered New York, as well as the NY Chapter of The UWI Alumni Association. In addition, he will conduct a series of interviews with print and broadcast media in New York and Washington DC.

Sir Hilary’s schedule incorporates a number of meetings and speaking appearances in his capacity as Chairman of the CARICOM Reparations Commission. Among these include speaking with a cross-section of labour movement and civic leaders in New York. In the DC- leg of his trip, Sir Hilary will meet with Rev. Jesse Jackson, deliver a special address at the Congressional Black Caucus Annual Conference (CBC), and be honoured with the Global Community Healer Award. He is also the featured speaker at an event hosted by the National African-American Reparations Commission (NAARC) where he will sign copies of his book, ‘Britain’s Black Debt’.

The University of the West Indies is on a strategic growth agenda, focused on partnership building with other universities, governments and institutions, international agencies, andpublic and private sectors worldwide. Professor Sir Hilary Beckles, who took up his tenure as The University’s Vice-Chancellor in May 2015 has begun zeroing-in on this area of The UWI’s strategic plan; with “Globalisation of The UWI” as one of his key priorities. In his installation remarks, Vice-Chancellor Beckles underscored his commitment to developing partnerships in education, research and development – all imperatives to the achievement of sustainable development in the Caribbean region.