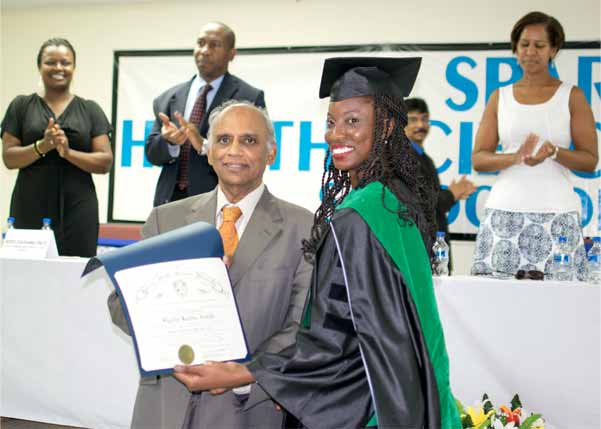 IT was truly a momentous occasion for the Spartan University School of recently when it launched an extension of its nursing programme, held a “white coat” ceremony and inducted students nurses.

A total of 64 students were formally enrolled in the basic medical sciences programme and 24 in the nursing programme.

A striking feature of the occasion was the investiture of the Basic Sciences students with their white coats and the recitation of the Hippocratic Oath.

The gala event held at the university auditorium, was attended by government officials, representatives of institutions which have partnered with the school in pursuit of its goals and parents and relatives of students, some of whom came from overseas.

Consultant/ Administrator of the university, Mr. Percival Mc Donald, in his address, gave some background about the school and the progress it has made since its establishment here.

“Within the context of health education, Spartan has taken the lead from its inception in 1982,” he said.

According to him, from 1980, the Government of St. Lucia chartered and licensed the university, and further through its accreditation body- the St. Lucia Monitoring and Accreditation Committee granted full accreditation to the university for seven years in the first instance, effective August 2004 to September 2011. He said a revisit to the university by the monitoring committee extended the recognition/ registration period from 2011 to 2013 and recently from September 2013 to March 2016 in accordance with the Caribbean Accreditation Authority for Education in Medicine and other Health Professionals (CAAM-HP).

The monitoring committee is appointed by government to oversee and ensure that the academic, fiscal and management standards are within international standards.

“In order to be fully recognized within the region, the U.S and the rest of the world, Spartan initiated a bold step in May, 2012, by applying to CAAM-HP for accreditation status. The procedure began in May 2013 and ended with Spartan being granted provisional accreditation for two years, effective September 2013 to September 2015 with recommendations,” Mc Donald explained.

Another site-visit by CAAM-HP is due November 2015 where the University hopes to attain full Accreditation.

Minister of External Affairs, International Trade and Civil Aviation, Alva Baptiste, in his address, showered the university with praises for the progress it has made since establishing here.

“Today we are making history with a medical department, a nursing department and a veterinary department,”… Baptiste said.

He identified some of the qualities of a great nurse as communication skills, Interpersonal skills, physical endurance and problem solving skills.

“A nurse must have good communication skills… She must be the patient’s friend. There are certain intimate details that people will not want to share, so a nurse must be very tactiful to get them,” he said.

The minister said the attitude of the nurse may be the difference between life and death of a patience.

Minister of Education and Labour, Robert Lewis, said he was pleased with the recognition Spartan had obtained from the various bodies both locally and internationally.

He called on the students to uphold the university’s tradition of excellence.

“No matter how big is the name of a school, it is it’s student who will make it important”, Dr. Lewis said.

According to him, medicine requires a special commitment and only people with determination will pursue it.

“Some people go into certain profession by chance, but this is not the case for medicine,” the minister said.

Deputy Nursing Director of St. Jude hospital, Cherianna Phillip, said the university and the hospital had developed a bond which they have both benefited from.

President of Spartan, Dr. A.C Rao said he wants to see the school become the best learning institution in the Caribbean and he was working towards that goal.