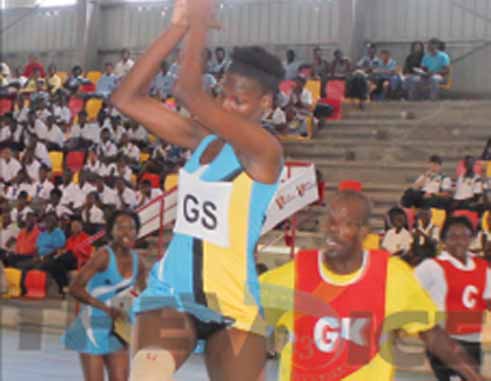 THE Ministry of Youth Development and Sports launched its schools sports programme for 2015 – 2016 last Thursday at the Beausejour Indoor Facility. A number of secondary and primary schools were represented.

The event included Table Tennis, Basketball, Netball, Cricket and Futsal. The Futsal game featured a “dream team” from the Ministry of Youth Development and Sports against the representatives of the sponsors.

Yesterday saw the commencement of the Under – 15 netball competition in Group A, B and C, while today the competition starts in under – 19 netball.

Meanwhile, addressing the gathering at the BIF Minister of Youth Development and Sports Shawn Edward declared the games open, and thanked the many sponsors who have come on board to support the Ministry.

He said: “The contribution of the sponsors is even more important today than it was a few years ago. The budget of the Ministry of Youth Development and Sports has been reduced and so we have to work very closely with corporate St.Lucia just to ensure that we have the resources needed to make the schools programme happen”.

He added: “About four years ago there was no school sports programme to talk about and the Ministry had to be selecting teams to participate in the Windward Islands Championships by way of what was known at the time as a festival. But today we have a full fledged competition in the various sporting disciplines thereby giving all student athletes an opportunity to represent not just their schools but to actually vie for a place on the national team in the respective sporting disciplines.

“We have also separately provided an additional $7,500.00 in each of those years to the National Tennis Association towards the Schools Tennis Tournament. In the last three years, we have seen the National School Sports make some strides. We have seen increased participation of schools, some improvements in the organisation of the various tournaments, improved crowd support from students and parents for some of the events. The athletics championships at the Beausejour Cricket Ground stands out as one of the very successful events. We are pleased to see the Sir Arthur Lewis Community College welcomed back into the various tournaments”.

She continued: “We have reports from several schools that the national school sports programme has helped to revitalise sports at the school level; students are more willing to participate in training activities knowing that they are working towards a specific tournament; and the impact that the increased participation in sports has had on keeping students gainfully engaged after school. So we are pleased with some of what has been accomplished so far”.

But Regis said,there were areas where LUCELEC would like to see further improvements. “Our understanding is that there are still some schools that have not or are reluctant to embrace the National School Sports calendar. If that is the case we hope that there is a plan to bring them in, sooner rather than later. We also trust that the availability of first aid or emergency support at every game has become part of the standard operating procedures for the games. We will like to see greater collaboration between those responsible for the learning and sporting calendars for the school year. This we think will yield improvements in the scheduling of the entire calendar of events and the communication of that calendar to the various schools, such that the schools can plan appropriately and schedule their own internal sports and training sessions in such a way that their athletes are adequately prepared for the national school tournaments or meets”.

“LUCELEC would also like to see greater collaboration with the national sporting associations in the organisation and conduct of the various tournaments and events, and for our school athletes to become more competitive regionally.

“Our returns in regional competitions have not been very flattering of late. We’ve seen some analysis of the reasons for these results. What we would like to see also is a plan of action for addressing the challenges identified and turning those results around”, Regis said.