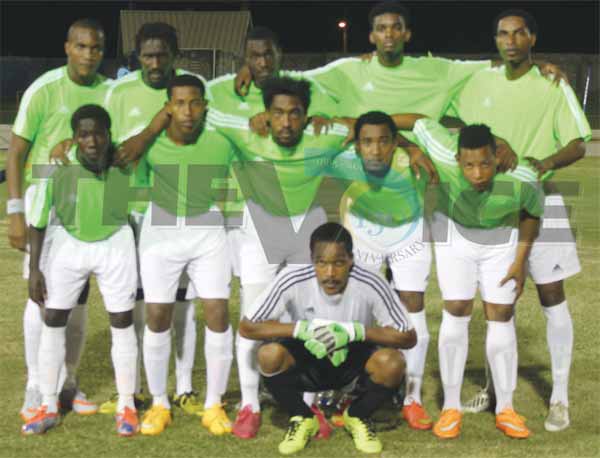 From 6.00 p.m. Roseau Valley plays Soufriere, while at 8:00 p.m. Marchand will come up against Micoud.

The winners of these two encounters will meet in the semi finals at the same venue this coming Saturday.

On Sunday evening defending champions Canaries and three time former champions Dennery booked places into the semi finals after a massively entertaining and exciting weekend of football at the Soufriere Mini Stadium.

First to book their ticket into the semi finals was Dennery which had a convincing 4 – 0 win over South Castries. Dennery were led to victory by second half substitute Winel Felix who scored two goals in the dying minutes of the encounter in time added on. Other goals for Dennery came from KenviePolius in the 35th minute and RidelStanislaus in the 55th minute.

The defending champions Canaries booked their spot in the semi finals with a controlled 1 – 0 win over Babonneau. Antoine Wilfred was the goal scorer for Canaries in the 13th minute, his second goal in as many matches in this year’s tournament.

Dennery and Canaries will meet in one semi final on Saturday in what is expected to be a mouth watering encounter.

Meanwhile, on Saturday evening Micoud and Soufriere earned the rights to play in the quarter finals after contrasting wins over Mabouya Valley and Gros Islet.

Micoud’s penalty from KershanMarcellin in the 8th minute was enough to get them into the quarter finals.

Soufriere staged a miraculous and unbelievable comeback in their match against Gros Islet as they came from being 2 – 0 down to win 4 – 2.

Gros Islet quickly went ahead with goals in the 8th and 36th minutes from Troy Greenidge and Elijah Louis. Soufriere pulled one back at the stroke of the half time whistle of Referee Leo Clarke when Arthurton Griffith converted.

The resumption of play saw a transformed Soufriere team in the second half as they went on to scored three unanswered goals in a period of play which had the large partisan crowd on their feet in a frenzy as goals came from Arthurton Griffith in the 47th minute, Jordan Henry in the 57th minute and Ned Etan in the 73rd minute to seal the deal.