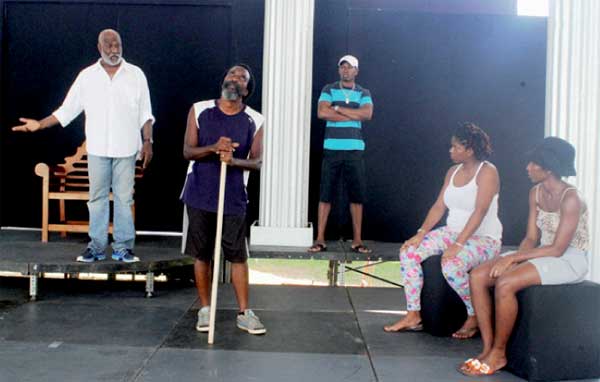 The play is being directed by Alvin Hippolyte, who served as Director of Culture in Saint Lucia from 1980 to1983 before moving to the United States where he now lives. Landmark Events will provide production support.

The central conflict in “Antigone” stems from its lead character, Antigone, who challenges the State. Antigone’s frustration with the State begins when she attempts to secure a respectable burial for her brother, Polynices, who was killed in battle between him and his brother, Eteocles, even though he is seen as a traitor to Thebes and the law forbids even mourning for him, punishable by death. On the other hand, the king affords Eteocles a burial with full military honours for having fought on the right side.

The 90-minute play opens at Samaans Park tomorrow from 8:00 p.m. with a gala night at $85 a ticket. The play continues nightly form Thursday to Saturday and tickets for those nights cost $45 each.
Hippolyte is currently an actor/writer/director and teaches theatre arts in New York. He is also associated with a theatre company, Brave New World, which is involved in staging classical theatre. In 2010, Hippolyte directed another play here, “For Colored Girls”, which was also staged at Samaans Park.

Directing “Antigone”, Hippolyte told The VOICE, gives him an idea as to how talented the dozen Saint Lucian actors and actresses are. He commended the wealth of talent that continues to shine through even in a society where theatre is not appreciated much. To miss the staging of the play, he said, should be out of the question since the play’s themes are both timeless and relatable.

“I think Saint Lucians should come to see “Antigone” performed here because it’s good theatre,” Hippolyte said. “The play’s issues and themes in terms of whether or not the law needs to be obeyed regardless. I think in the Caribbean there are many instances when we have to ask ourselves these questions as to whether the law should be obeyed regardless and whether people need to stand up for things that they believe in strongly.”

Hippolyte said people need to challenge the government’s position at times since governments can often be dictatorial.

“It’s true they’re in the guise of democracy but that doesn’t mean they function that way,” Hippolyte said.

While he decried the virtual lack of the necessary creative infrastructure on the island that lends itself to huge artistic productions and the impetus for more people to get involved in and appreciate the arts much more, Hippolyte said a great deal of talent does exist in Saint Lucia.

Sophocles, a famous Greek playwright, wrote “Antigone” in 441 B.C. The play has since become a favourite among many theatre houses across the globe.