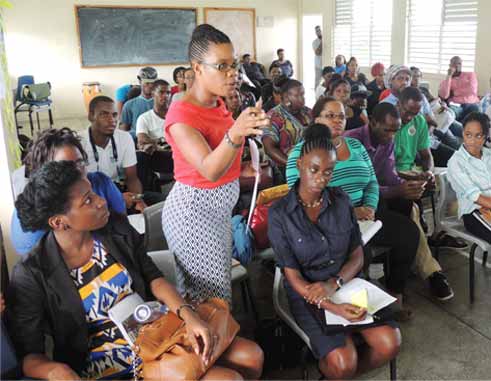 YOUTH leaders on the island are keen to participate in, and contribute to the process of shaping a National Vision and National Strategy for Saint Lucia.

This much was gleaned from an encounter with a core group of Youth Leaders from across the island last week. The Lucian Leaders Forum – as the event was dubbed – was hosted by the National Youth Council (NYC). It was held at the Piaye Secondary School.

Throughout the week, participants were involved in various activities designed to improve their leadership capacities. Participants also engaged in the Beckwith International Leadership Development (BILD) programme, where they developed their skills as youth sports leaders.

The forum brought together over 85 youth leaders at school, community and national levels. Coordinator and former NYC President, Jonathan Chalon, who currently sits on the National Vision Commission, saw the forum as a unique opportunity to bring the NVC Commissioners into direct contact with this vital cross section of the society to talk about the national visioning process.

NVC Chairman, Adrian Augier spoke of the process of national dialogue, which began earlier this year and which will intensify towards the end of 2015. He reminded the youth that they have a major stake in the visioning process since it is primarily their generation that will implement and benefit from the vision and strategy which emerges.

Augier told the audience that the NVC considered youth to be the most vital section of the population to be consulted, and that they need to be involved in the process of visioning the future Saint Lucia.

Said Augier: “The future Saint Lucia is going to be designed for persons like yourself, who are somewhat dependent on those persons who are in positions of power and authority now to create the Saint Lucia that you and your children will inherit and live in; So the youth sector is the most important constituency to be consulted in developing a vision for Saint Lucia.”

SkeetaCarasco, one of the youngest Commissioners, also addressed the gathering of diverse young leaders. She lauded the foresight and wisdom of appointing young persons to the Commission to bring that youthful perspective and energy to the visioning process and encouraged the young leaders to embrace the opportunity to contribute to the process, as it will impact them the most.

She told the gathering: “I urge you to be part of this process of visioning what we want our country to be in the future. This visioning exercise is really about the youth; it cannot be about those who are on their way out; it’s really about you and what future you want for yourselves and your children, so please let your voice be heard.”

The session then opened for feedback and fielded a range of questions including the life-span of the Commission; how it proposes to gather perspectives; approaches to fulfilling its mandate and methods of final reporting.

He explained: “After we have done the consultations, after we have drafted the National Vision Statement, we will have a second round of consultations where we will come back to the people, to say this is what we understand, did we get it right? Following this validation exercise, the Commission will then prepare its final report.”

The NVC Chairman also indicated that the National Vision Statement will embody the aspirations of the vast majority of St. Lucians, as it will reflect what the people want for themselves and their country. He also indicated that the accompanying national strategy will look at specific priority actions that need to be taken to bring about the vision. He indicated that the Commission will not be taking a ‘sector’ approach in developing the strategy but will look much more broadly at overarching issues like Human Resource Development, Economic Management, Resource Allocation, Good Governance, Nation Building, Innovation, Investment, Technology, Heritage and Culture.

Outside its schedule of dialogues, Augier encouraged the youth leaders to invite the Commission to meet with their youth groups, clubs and organizations in their respective communities. He indicated that the Commission has developed a template for consultations. This involves determining what aspects of nationhood and citizenship Saint Lucians most cherish; what changes they consider most important; and how citizens see themselves bringing about the priority changes they envisage.

It was further explained that such priorities may be identified at the individual, group, organizational, institutional, constituency, sectoral or national level. That approach helps build a matrix of issues/challenges, strategies and solutions to help shape the vision.

The National Vision Commission has a lifespan of two years. It was launched in April of 2014. The Commission is expected report to Parliament by May 2016. It will intensify the process of national dialogue this September and aims to complete the first round of consultations by December. This will be followed by intense drafting of the National Vision Statement and National Strategy between January and March 2016.