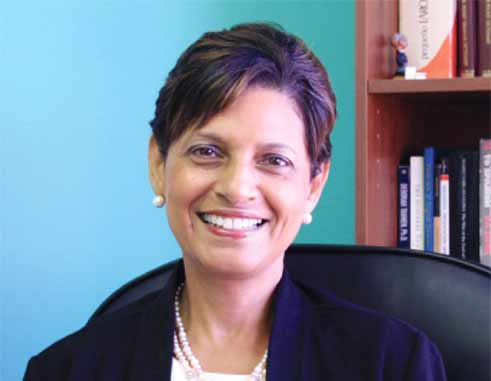 Dr Longsworth arrives on Monday and will engage in a whirlwind series of meetings with Open Campus students, government officials, members of the private sector and the media until her departure on Thursday.

While on island, Dr Longsworth will also pay courtesy calls on Governor General Dame PearletteLouisy and on Dr. Robert Lewis and Ms. Esther Brathwaite, Minister and Permanent Secretary in the Ministry of Education, Human Resource Development and Labour respectively.

Dr Longsworth will also participate in annual Student Orientation Activities at the Open Campus on Wednesday, when she will deliver the Welcome Address to the 200 new students joining the Open Campus family in Saint Lucia for the 2015/2016 academic year.

Dr. Longsworth is a Caribbean national who was born to Venezulean and Jamaican parents and who lived and worked in Belize for many years raising two children. Fluent in Spanish and French, she also holds a Doctorate in Business Administration in Higher Education Management from the University of Bath in the United Kingdom. She is also a graduate of The University of the West Indies where she earned her B.A. in French and Spanish and M.B.A. (Marketing) degrees. She is the holder of a Master of Arts degree in Hispanic Studies from Queen’s University, Ontario, Canada.

Dr Longsworth has over 25 years of experience in both academia and business in Jamaica, the British Virgin Islands (BVI) and Belize. As a senior administrator at The UWI, she has served in various posts at the Mona and Open Campuses, including Director of the School of Continuing Studies, Director of The UWI Open Campus Country Sites, and as Director of The UWI Mona Western Jamaica campus in Montego Bay, Jamaica.