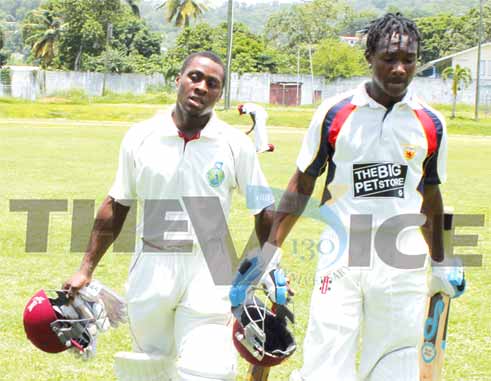 THE St. Lucia National Male Senior Cricket Team continued preparation for the Windward Islands Goodwill Cricket Tournament which bowls off in St. Vincent and the Grenadines on Thursday with a two day practice match against the Police Cricket team over the weekend at the Mindoo Phillip Park.

The national team batting first made 438 all out in 93 overs, with Tarryck Gabriel fresh from playing Club Cricket in the UK scoring a double century.

Gabriel who opened the inning, batted with great ease, composure and class in making 204, which included 23 fours and 6 sixes.

Other useful contributions came from, Awen Edward who made 53, Dornan Edward 47, Craig Emmanuel 37 and Kurt Edward 33.

For Police, the stand out bowlers were Barry Charles who took 6 for 47 in 13 overs and Alex Antoine 2 for 44 in 7 overs.

In reply, Police was dismissed for 144 in 47.5 overs, with Gaspard Prospere contributing 44, Cyril Charles 29 not out and Travis Chicot 17.

For the National Team the wicket takers were, LoicProspere 3 for 28 in 7 overs, Dalton Polius 2 for 25 in 7 overs, Kevin Augustin 2 for 36 in 7 overs and one wicket each to skipper Emmanuel, Dornan Edward and Alvinus Simon.