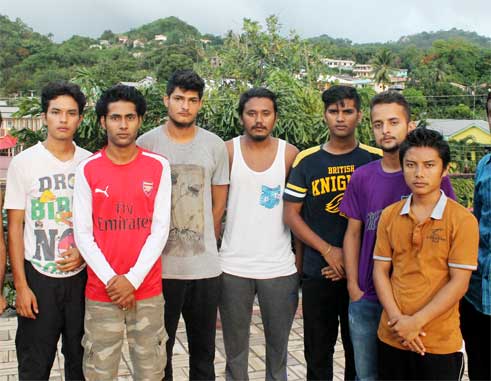 DESPITE having previous concerns about returning to their native Nepal empty-handed, some former Lambirds Academy students now seem willing to choose repatriation over money.

Speaking to The VOICE last Friday afternoon, close to a dozen of the estimated 50 foreigners still stuck here after the learning institution was closed last February, said they are frustrated beyond words about their plight.

Twenty-three-year-old Abinesh Bikram Bista said he’s had enough of the whole situation and just wants to restore normalcy to his life.

“I really want to go back to my country because I lost my siblings, my brothers, in the last earthquake that devastated my country,” Bista said. “I have been saying this to the Saint Lucian government – either at Ministry of Home Affairs or the crime branch.”

Bista said local authorities have told him and the other former students that they must be kept here as witnesses until the last case is completed. Nevertheless, he, like many others, is getting homesick.

“So our request to the Saint Lucian government is to allow us to go back home and keep those students who want to stay back as witnesses,” Bista explained.

Bista told The VOICE that he and some of his countrymen are willing to return home without their tuition and other monies they spent to take up courses at Lambirds Academy. Should the court case be ruled in their favour, he said, their monies can be sent to them in Nepal. If the court does not rule in their favour, he said, the students will understand.

“There are a lot of students who want to do their Bachelor’s Degree,” Bista said. “But if they stay here for one year doing nothing, then one year is lost. So it’s directly impacting and affecting our future. We can’t stay back for this long.”

Bista said some of the former students still maintain that they are not willing to return to Nepal without their monies while most are prepared to await the outcome of the charges brought against Lambirds Academy’s Executive Director, Iftekhar Ahmed Shams, who has been charged with money laundering and human trafficking. All of the students have since made statements to the police regarding their situation at Lambirds Academy.

He added that whenever the former students indicate to local authorities that they have now changed their minds about staying in Saint Lucia until they received their expended finances up front, they are being referred to other agencies that also do not provide solutions.

He said the referrals have been going on for some time now and some former students are becoming increasingly frustrated. He compared the past six months of waiting in Saint Lucia to being paralyzed.

For five weeks now, about 45 of the former students have been staying at guest houses in the city and Bista said at least 30 of them have indicated that they are now willing to return home via the International Organization for Migration (IOM)’s offer. With no classes to attend and no means of earning a pay cheque despite government assisting with the foreigners’ accommodation, Bista said he and his fellow comrades feel useless.

“We are all frustrated,” Bista told The VOICE. “Either give us part-time jobs or send us back home because we really care about our future.”

Bista, who came here to study hospitality and tourism management, said his request is an urgent one, adding that he lost his brothers in the earthquake that decimated Nepal’s capital, Kathmandu, in April. Being the eldest child, he said it’s now up to him to take care of his parents. His father is currently unemployed and his home was mortgaged in order for him to take up studies at Lambirds Academy, he said.

The former students’ requests come months after they refused to return home via assistance rendered by the IOM and the Ministry of Foreign Affairs here. Many of them refused to sign the IOM waiver, claiming that some of the terms and conditions contained in the document were disadvantageous to them. After months of being in limbo here in Saint Lucia, they now seem willing to take up the IOM’s offer.

At the time the IOM’s offer was initially made, many of them said that should they return to Nepal without the monies they owed, they risked facing death by their creditors. Bista and the former students The VOICE spoke to last Friday now seem willing to take their chances.

“The bank is about to seize my house, so I really need to go back,” Bista said. “Either I go back home or apply to some other countries, earn some money or go back to the cruise line. I have visas for a cruise line that’s waiting for me. I have a contract with them back there. I cannot stay here for just US$7000 owed to me. The government here might be looking after me but who’s looking after my old parents?”

Another former student, Rajan Thebe, 21, came to Lambirds Academy to take up a front office course. With those hopes now dashed, he is now resigned to waiting on the legal matters against Shams to take their course and receiving a once-a-week phone call from his parents.

“It’s been really frustrated staying here,” Thebe said. “Whenever my parents and relatives call me, they just want me there. I lost my home in Nepal and they want me to be there to support them. I just want to go home”

Sabal Lamichhane, 23, tells a similar story. He came to Lambirds Academy to study laundry, cooking and baking. Today he finds it difficult coping with the stresses he has experienced as a result of his ill-fated choices, he said.

“It’s been very tough. I think the government is not supporting us right now because we want to go home. The earthquake has devastated everything. I, too, have lost one of my family members,” Lamichhane said.

According to Lamichhane, local authorities should take the former students’ appeal into consideration, especially since the process of the case against Shams and his co-defendants might go on for some time.

“The government should assist those who want to go back home to do so and let the others remain if they want to,” Lamichhane told The VOICE.

The VOICE contacted the Ministry of External Affairs yesterday regarding the former students’ claims. However, we were told that both the Permanent Secretary and Deputy Permanent Secretary were out of office for the day. An official from that ministry told The VOICE that a comment from that office might be forthcoming shortly.