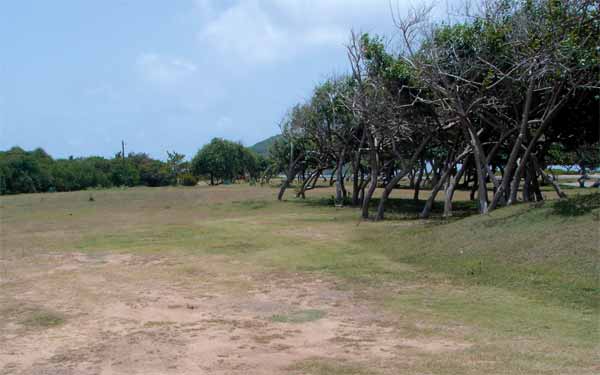 A PROPOSAL by a local businessman to purchase the portion of land where the Point Sable Recreation Park in Vieux Fort is located to construct a shopping mall, has caused a stir in the community.

The proposal was brought to the Vieux Fort South Constituency Council, and only one member , the popular musician Monty Maxwell opposed it.

The name of the proposed investor has not been made public, but The VOICE understands that the person is not a Saint. Lucian –born national.

The Point Sable Recreation Park which is part of the Point Sable Environmental Protection Area is the venue for a number of social and cultural activities, and also a place where people from all over the island recreate.

The Council sees the shopping mall as one which will bring much needed employment to the town, but residents feel it will have the same effect if built in another area. They say they are prepared to do everything legally possible to make sure that the mall is not constructed in the area where the Point Sable Recreation Park is located.

And the man who is leading the charge in that regard is Maxwell who has a petition circulating that has already attracted much support by way of signatures.

“I am very impressed with the support I am getting from the general public. This is a clear indication that people in Vieux Fort do not want the area to be destroyed,” Maxwell said.

According to him, he is not against a shopping mall being built in Vieux-Fort, but feels there are other locations in Vieux-Fort where it can be built.

“The area, (Point Sable Recreational Park) is of historical value to us. Aircraft parked and camouflaged there during the Second World War,” he said.

Maxwell said the area was nurtured by Vieux Fortians who would like to see it preserved, rather than be destroyed by the erection of a building. He added that even Prime Minister and parliamentary representative Dr. Kenny Anthony played a role in nurturing the area.

“I was one of the persons who spearheaded the cleaning of the area. Invest St. Lucia had no part to play in clearing it,” Maxwell said.

He said not only Vieux Fortians recreate at the park, but people from all over the country, as well.

“The park is also the home for Jazz finale, which has been given rave reviews from all over…, including the St. Lucia Tourist Board,” Maxwell said.

And while the mall proposal is being considered, Maxwell said he will continue planting trees at the park which he has been doing for many years now.

Vincent Clarke, a member of Eco South Tourism, the National Trust’s Southern Chapter, the Aupicon Charcoal Producers Association and a director of the Southern Tourism Development Corporation said he vehemently opposes the idea of building a shopping mall in the area where the park is located.

“The area has a lot of historical value and should be preserved, rather than be destroyed…” Clarke said.

“If the area is destroyed where will Vieux-Fortians recreate?”, he asked.

Clarke said the heart of Vieux-Fort is like a ghost town and will do good with a shopping mall.

Jennifer Fevrier, another resident of Vieux-Fort who signed the petition said the park is of particular importance to the residents of the depressed area of Bruceville, whose children use the area to recreate on a regular basis.

Mayor of Vieux Fort Winall Joshua declined to comment on the proposal at this time, but said he will do so in due course.