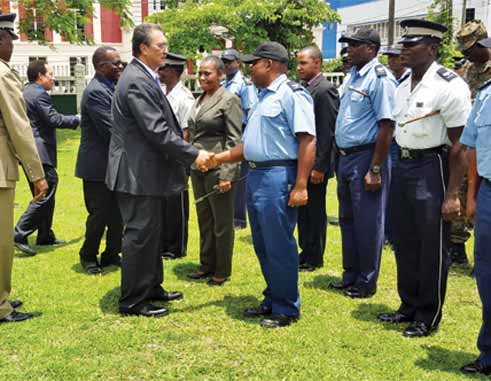 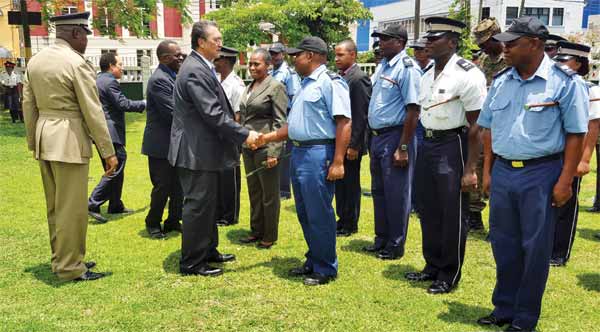 FORTY-TWO members of the Royal Saint Lucia Police Force who were recently promoted to various ranks have been advised to earn the confidence of the public, to fight evil which is everywhere, and to take on the responsibility that comes with their rank.

According to the Prime Minister public confidence in any police service was paramount. The police’s work would be stymied and become ineffectual if it did not engender community confidence and participation in law enforcement.

The newly promoted officers were called on to choose the best, because with rank comes responsibility.

Said the Prime Minister: “Because, as police officers, you mean so much to so many. When nearly anything is going wrong, the society is turning to you for a solution: for crime prevention, for criminal investigations, for mass crowd events, for traffic control, for smooth immigration services and border control, for the loud music at three in the morning, for the missing child, the stolen phone, the car accident. From turtle protection to drug interdiction, you are expected to do it all, and to do it professionally and with good spirit. How you approach policing is thus important to each and every one of us, especially in these trying times.”.

He noted that the police officer was under scrutiny on and off duty, even in the social media where some unwittingly choose to bare all.

“Moreover, the police officer must be prepared to communicate more, contemplate more and coerce more. The Police Force is expected to be operating more through intelligence than brute force. Your greatest strength, your greatest weapon must be your mind, not your arm. Your greatest defence must be the public trust on the beat, not your shield and station. This is a new time; it calls for smart approaches and new leadership,” the Prime Minister said.

He called on them to show leadership qualities in their duties and in their knowledge as this is important to the future of the Force.

“Today’s promotion must be a statement to those you serve: that the police will lead in law enforcement, working together with the public, not against them, but with them and for them. Today, every officer, and especially those who are being promoted, is being called to greater leadership. And as you well know, in the disciplined forces, with greater rank comes greater responsibility. Today, you are being promoted to greater duty and rightful expectation. It is what the force requires at all ranks, in all divisions, and in all stations, departments and units. At this juncture, leadership is not a luxury, but a necessity. I am therefore keen to see this new leadership among all ranks, and starting with you,” the Prime Minister said.

He warned that there are no untouchables in the police force and that everyone who is promoted has a duty to justify the trust of promotion.

“This means just as you were promoted on the promise of leadership and professionalism so too you must face the possibility of demotion or dismissal if you do not live up to the expectations that you offered. In time, I would hope that the leadership of the Force can establish, in clear terms, the grounds that could attract demotion,” Dr. Anthony said.

Out of the 42 officers who were successful at the promotions examinations 27 were constables promoted to corporals, 11 were corporals promoted to sergeants and four moved from sergeant to inspectors.