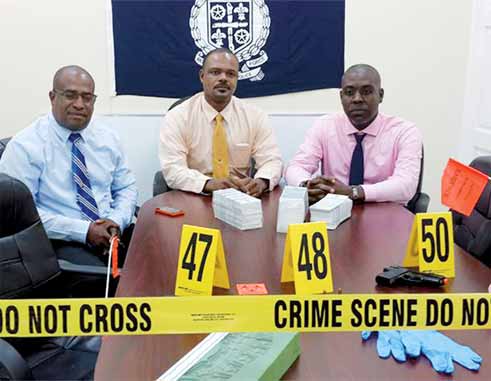 WITH the rapid advancement of technology where mostly every man, woman and child is in possession of at least one mobile phone, one unit from the Royal St. Lucia Police Force has come up with a plan to sensitise individuals who encroach on crime scenes out of curiosity of the urge to record and document them.

Sergeant Shervon Matthew who is attached to the Crime and Intelligence Unit said the new initiative is in the form of a 10 tip bookmark titled “To preserve and protect: health and safety for civilians at crime scenes.”

Sgt. Matthew said over the past couple of years, the police have noticed civilians making it a habit of invading crime scenes which could cause cross contamination.

He said, “We have many issues when it comes to processing the scene after persons have encroached onto the crime scene. We also notice that persons put their lives at risk because at the crime scenes, there could be harmful bodily fluids and micro organisms which are invisible to the naked eye. For example, if you’re on a crime scene where there is a lot of blood and you have a cut, if the person who is bleeding has an infectious disease like HIV/AIDS or hepatitis and their blood gets into your system then you can be infected. So this is why we’re urging St. Lucians to be cognisant of what is going on especially at crime scenes.”

Sgt, Matthew also sent out a stern warning message to individuals who tamper with crime scenes by either removing or shifting objects at such scenes. This, he said is extremely problematic and will only serve to prevent investigators from solving the cases and so the repercussions are severe.

He said the police are usually outmanned at crime scenes and it is often very difficult to get the huge crowds of onlookers to step back, hence the bid to re-educate them so that they stay away from such scenes.

Sgt. Matthew also wanted individuals to know that police work is not like what is portrayed on television shows like CIS: Crime Scene Investigation, Law and Order and all the other similar dramas.

He added that one other aspect of this movement is to better the relationship between the police and the different communities so that they can work together to solve crime.

The incentive does not stop with bookmarks; the team will be making school visits, television and radio appearances to ensure that their message reaches out far and wide. They will be handing out flyers and are also working on producing a commercial.

According to Sgt.. Matthew, failure to adhere to the rules stipulated by officers on a crime scene can lead to arrest.