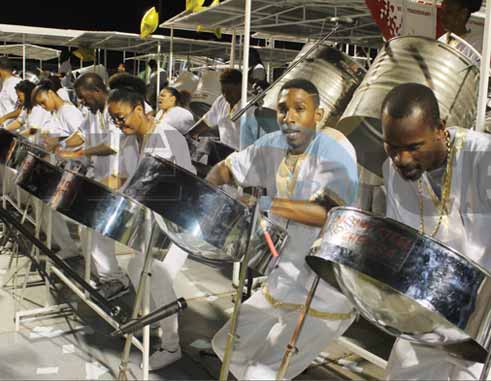 PANTIME Steel Orchestra winners of three consecutive Panoramas is taking its talents to Trinidad and Tobago.

Founded in 2000 by Cecile “Tortee” Philgence, the band’s goal has always been the development of young people through music, specifically the steel pan. Pantime has also won the Junior Panorama competition twice in a row.

The band’s Panorama victory during Saint Lucia Carnival 2014 qualified them to represent Saint Lucia at the 2015 International Conference and Panorama (ICP) in Trinidad and Tobago, which is now on, and culminates with an International Panorama on Sunday..

Sixty players and management personnel have travelled to participate in the groundbreaking event. The ICP is being attended by bands representing several regions of the globe including Africa, Asia, North America, Europe and the Caribbean.

Pantime’s test-piece, Aunty Pam, is a tribute to the mother of the band and the wife of the founder; Phillipa Reynolds Philgence, who was affectionately known by Pantime players as “Aunty Pam” and sadly passed away in November. Pantime won the 2015 National Panorama with AmritSamaroo’s arrangement of Aunty Pam, and will be competing in the ICP with the same arrangement.