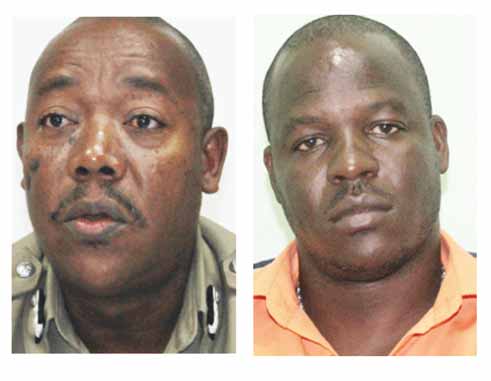 Sponsored
Share this post:
THERE is no ill feeling between the President of the Police Welfare Association, Camron Laure and acting Police Commissioner Errol Alexander, both men have asserted.

“I can guarantee that he is not being targeted,” Laure emphatically said yesterday of Alexander in a telephone interview with The VOICE.

Alexander, who acknowledged that he received a letter from Laure early last month dealing with certain concerns, said although he felt Laure was being unfair and unreasonable he did not think he is being targeted by either Laure or the Association.

“I have not treated the tone of the letter with any resentment….I won’t say that I’m being targeted but it’s unfair and unreasonable to get those things done within the period that I have been in the chair,” Alexander said.

“I have no proof that I am being targeted,” Alexander added.

The letter contained an invitation to Alexander to sit with the Association’s executive to discuss a number of issues such as the deteriorating state of the Soufriere Police Station, the thorny issue of promotions within the police force, transfers, the issue with Special Police Constables and that of Senior Constables, among other things.

Alexander is of the view that within the short space of time he has been sitting in the Commissioner’s Chair, Laure should not be so demanding of him to deal with the issues outlined.

Alexander became officer in charge of the police force on March 9 when Commissioner Vernon Francois went on vacation leave. He was appointed Acting Commissioner on March 23.

Alexander, at a press conference on July 24, said that at the time he received the letter from Laure it was difficult to provide an immediate response because the police force was in the midst of planning for carnival and so Laure had to be patient because he and his executive had to give Carnival precedence, it being the biggest operational event for the police on the annual calendar of activities.

“It’s our responsibility to police this event effectively, efficiently and as best as possible, incident free. Although I don’t want to pick a fight with the President since we must work together in harmony for the well-being of the men and women in the Force so they can perform at their maximum, I believe he is being unreasonable and unfair in his assertions and he should help mend the organizational wounds,” Alexander said.

Alexander wants to know why all of a sudden within three months of being given charge of the police force, demands were being made on him and now he is being asked to attend a meeting with the Association.

“I am not saying that I will not meet the Welfare Association in due time since we must create that work synergy,” Alexander said.

Laure and the Association’s Executive meanwhile are not waiting. They are looking at meeting with their members next week to update them on the issues contained in the letter and to plan their next step forward.

Alexander is still calling for patience on the part of the Association saying that he and his executive have not been idle in the short space of time he has been at the top, pointing other priorities like restoring a level of stability to the police force amidst all the uncertainty surrounding it following the report of the IMPACS investigating team.

With regards to some of the issues outlined in the letter such as the deteriorating condition of the Soufriere Police Station, he said that a team of engineers has conducted an assessment of the building and has forwarded a report on the way forward regarding that police station,

In respect of promotions within the police force, Alexander said that although the island’s constitution gave the Commissioner of Police the powers to promote members of the Force he would not just go ahead and promote anyone. He called for a set of rules to guide him as to who should be promoted and who should not be promoted and for transparency to be seen throughout the process.

“There needs to be a yardstick as to who gets promoted even though the constitution gives the Commissioner of Police powers to promote,” Alexander said.