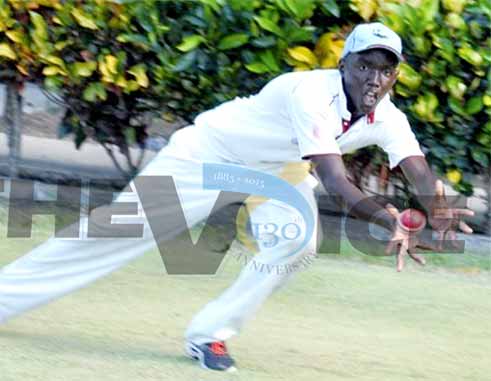 WEST INDIES Under – 15 cricketer and national Kimani Melius who is scheduled to tour the United Kingdom from today scored big again on Tuesday.

Melius walked away with the top honours at the closing ceremony of the 15th annual Sandals Cricket Academy Camp held at the Beausejour Cricket Ground Players Pavillion.

The right hand batsman / wicketkeeper took home the prestigious awards for Best Batsman and Most Outstanding Cricketer during the eight day camp at the BCG.

Speaking at the closing ceremony was West Indies T20 captain and former Test and ODI captain Darren Sammy who encouraged the 26 participants to persevere to achieve their goals.

Sammy said; “I will persist until I succeed, I will always take another step, even if it is to no avail, I will take another and another, in truth one step at a time is not too difficult”

He continued, “Perseverance is persistent determination. We are all cricketers and we have to be persistent as it is the key to success. As young cricketers you must have a never ‘give up’ attitude. It is also the foundation of great achievers like Sir Garfield Sobers, Tiger Woods, Brian Lara, Michael Jordan, Roger Federer, they all persevered playing different sporting disciplines”.

He added: “Success is not guaranteed to a winner. The great achievers do not sit back and wait for success to come, they keep moving forward and persevering because they are so determined to achieve and absolutely nothing will stop them”.

Sammy said, “the trials and pressures of life and how athletes faced the two, often defined them as most are confronted by difficulties. “Many people give up while others rise. As I speak there are 26 young cricketers in this room and one amongst you, has made it onto the West Indies Under -15 team, one who has perservered, is disciplined and performed and he has been rewarded. He did not back and allow things to happen. He went with his bat and ball and worked hard at his craft in the Massy United Under -19 school tournament”.

Sammy continued, “ Kimani scored a record breaking 275, and the one that perservere they are the ones that will stand out. It does not mean the remaining players on the team do not perform. It comes with an attitude. Kimani is already a role model and I understand he is well mannered. That will take you a very long way”.