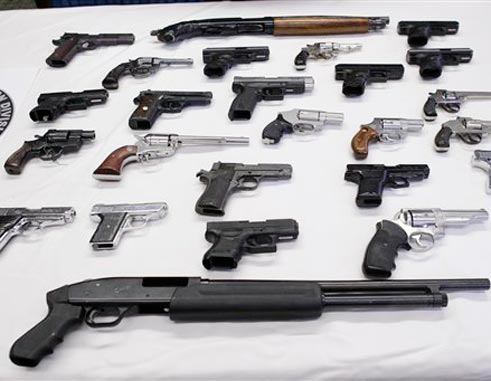 IS fighting gun crimes in St Lucia a hopeless pursuit? It certainly sounds that way after reading the text of an interview which Prime Minister Anthony has just given to a local online news service.

Are recent physical attacks on the police—including the firing of shots at the Richfond Police Station— manifestation of the feeling in the local criminal community that our police force is now vulnerable given all that has been going on in there in the past four months?

Acting Police Commissioner Errol Alexander seems to think that is the case and has sent out a warning that his men will defend themselves from attack. The question is can our Police Force do this without attracting a new round of heat from relatives of criminals who may fall in the melee, human rights activists and The United States?

What of the judiciary and its charge to mete out justice? Why is it that we get the feeling that even Prime Minister Anthony is not satisfied that it is playing its part in the crime fighting agenda.

Anthony quite rightly alluded to the fact that it was a previous government of his party that had enacted stiffened penalties for gun offenders, from possessors to importers. We recall at the time that these new measures were intended to seriously deter gun crimes with heavy fines and jail terms provided for in most instances where convictions were secured.

But now judges and magistrates have come under the radar. This is what Anthony is quoted as saying: “Bail comes too easily for persons who own and use firearms. Too many known criminals are treated lightly when they commit offences with firearms.”

Anthony added that judicial personnel sometimes get so consumed with protecting their judicial powers “as an end in itself” that they forget the larger public purpose behind the legislation that parliamentarians enact.

We have all observed this situation in St Lucia for sometime where judges and magistrates frequently opt to exercise their own deliberate judgment and not necessarily what the law mandates. When that happens, “the public interest gets lost in the maze of judicial decision-making”, to quote Dr. Anthony.

So where do we go from here? How do we get all parties, the government, the public and the courts on the same page in the fight against crime? The Prime Minister has expressed the view that the office of the DPP should be more active in appealing some of the bail decisions of the courts but what about the sentencing aspect of gun crimes that also frequently fall short of what the law provides?

There is no evidence that the supposedly tough laws enacted by the parliament a little over a decade ago to deal with gun crimes have had the desired effect. In fact we have seen that gunmen have become more brazen, shooting and killing people in our streets, and getting away with it too.

No. Criminals cannot be allowed to behave like they are bigger than the State. The laws that we pass to deal with them must be rigidly enforced and all the parties to that fight must be equally committed or else our situation will continue to be hopeless. The government needs to launch the charge that will produce the desired results.