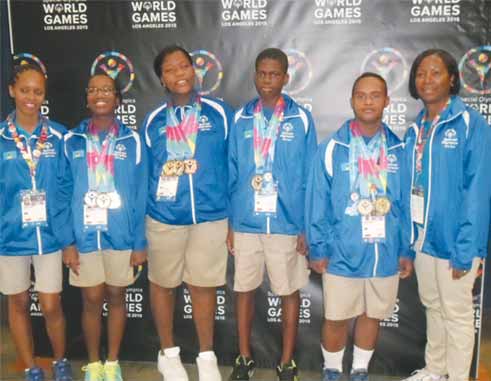 UNDER the skilful leadership of Delegation Head Junia Emmanuel-Belizaire and Denis Didier, Special Olympics St. Lucia has captured medals in all of three of the sporting disciplines in which they are participating in Los Angeles a whopping 20 awards altogether.

The team of Paulin Jameson, AniaIsidore, Cecil Fevrier and Jeremiah Henry captured the first Silver medal in Bocce Team competition, which caused excitement throughout the camp. This served to motivate the other team members participating in Track and Field and Soccer (Football). The Bocce quartet continued their run of medals in the singles event with Fevriere winning Gold, Isidore Jeremiah Charles both winning Silver, and Paulin bringing home a Bronze.

The male team of Fevriere and Henry did not medal in the Doubles Competition, but they fought hard. In the end they lost out to Ireland with a tie breaker leaving the score at 4:5. The ladies completed their quest for medals winning Gold in the Women’s Double finals on Saturday.

The Medal count with one Game remaining for Team Bocce now stands at – 2 Gold, 6 Silver (inclusive of Team medals) and 1 Bronze.

The Team is guided by their coach Nigella Fevrier-Barnette who is assisted by Patrice Peters.

Competition in Track and Field was no easy feat. The heats proved as competitive as expected with athletes putting out their best. In the end St. Lucia bagged the first Gold medal in the 200m division 35 with the speed and determination of Joshua Charles. Then Benvick Winifred bought home a Bronze and Nody Randy Gilbert after recovering from an incident at the starting blocks was able to come in a close second capturing the Silver Medal in Division 43 of the 200M.

The male team continued good run in the 100m with Joshua Henry bagging a Silver medal and Darwin Simon a Bronze medal in their respective divisions. In the low functioning category of athletes Marvin Emmanuel received a medal in the softball throw competition winning Silver and came in a distant fifth in the 50m run. The St. Lucia quartet of Nody Gilbert, Darwin Simon, Benvick Winifred and Joshua Henry won Gold in the 4X100m relay final, winning in a very convincing fashion.

The ladies held their own. The 100m event saw only Cheryl Louisymedaling with Silver in her division. However in the 200m event she along with Kurshel Herman both captured Silver to add to the medal tally. Shanice Stewart did not medal placing sixth in long jump and fourth in her attempt at the 100m run.

Their opponents during the qualifying rounds challenged every muscle and coaching strategy which only appeared to enhance their performance during each match. In the final rounds Team St.Lucia faced off against Spain, Aruba and Switzerland. The nail biting finish going into overtime against the Swiss proved stressful on both players and coaches an emotional time for all with St.Lucia winning 3 goals to 2. Leading goal scorer for St. Lucia is Jean Paul Isidore with a total of 7 goals (1 against Aruba; 1 against Spain; 3 against Switzerland and 2 in the finals against Switzerland).

The Special Olympics World Games, the biggest sports and humanitarian event in the world in 2015, will culminate on Sunday with the Closing Ceremony.