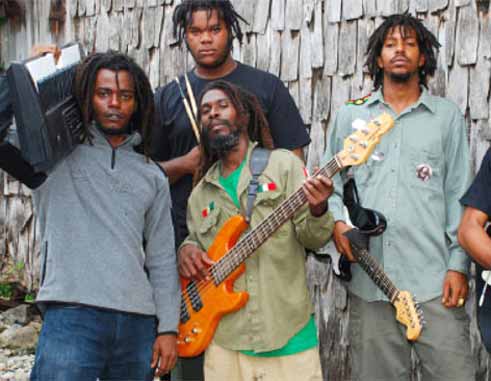 4TH WORLD continues to surprise. They emerged six years ago seemingly out of nowhere to become arguably one of the best reggae bands in the Eastern Caribbean, with their debut album, “Can’t Stop Us,” not only claiming the National Arts Award for Album of the year, but described by critics as “startlingly different to what has come before, pushing the edge of the envelope of world reggae music.”

Apparently, not satisfied with just pushing the envelope of world music, 4th World has taken their innovative ways to the realm of music videos. Not so long ago the band released a video for “Taking Blows,” the second track on “Can’t Stop Us,” that followed a minimalist approach and side- stepped the obvious, surface, literal interpretations common to many music videos. Instead they employed colour, graphic effects and symbolism to capture the mood, emotion, and context of the song.

Now, in similar fashion, 4th World has conjured a video for their rock single, “Rain,” a song of love gone sour in which despite his pain of lost love, the guy is accepting responsibility for the breakup: “If it will help at all, blame it all on me. If it rains, then let it rain on me; it’s a shame, I say shame on me; if it’s all just a game, you can put the blame on me.”

The video begins with rain beating upon a drumset, Nijah “Coldsweat” St. Catherine, lead vocalist, singing in the rain, and 4th World on top of Bruceville performing in the open against the backdrop of Pointe Sable Beach and the picturesque Maria Islets.

Then the video presents a mesmerizing concoction of alternating and juxtaposing of multiple and spilt screens of 4th World in black or white suits, coldsweat singing in the rain, the town of Vieux Fort, Bruceville, contrasting colours, rays of light, screeching lights, bellowing clouds. Then as if saving the best for last, towards the end we see the lady, the cause of the agonizing pain of which the song speaks, seemingly materializing from the Atlantic surf, save for her eyes completely enveloped in a red veil, presenting, against the backdrop of the Atlantic Ocean, Maria Islets, and the unvanquished Moule-a-Chique, a haunting, bewitching, mysterious but beautiful image that recalls Eve in the garden of Eden and the blue-veiled lady in Mel Gibson’s “Passion of Christ.”

It is a video of elemental forces, of passion and of high kinetic energy, perfectly capturing the mood, emotion and essence of the song—“If it rains, then let it rain on me.”

“Rain” is 4th World’s fourth single release since “Can’t Stop Us,” each of which has broken new ground. The first release, “Fixation,” presented an infectious fusion of reggae, funk, R&B and African rhythms. “Tchenbé-La,” the second release,is aKwéyòl reggae described by a commentator as the bringing together of Derek Walcott, Sesenne Descartes, and Bob Marley. The third release, Manmai Sent Lisi, is not only sung in Kwéyòl, but seamlessly fuses St. Lucian folk, jazz, Latin, reggae, and African rhythms to create what a critic described as “a wonderful masterpiece.” And, with “Rain,” 4th World completely left the realm of reggae and dived headlong into the world of rock.
If the remaining songs for 4th World’s second album, to be released early 2016, are as daring, innovative and captivating as these first four singles, then 4th World’s fans have a lot to look forward to. The second album may very well eclipse “Can’t Stop Us,” the band’s much praised and award winning debut album.