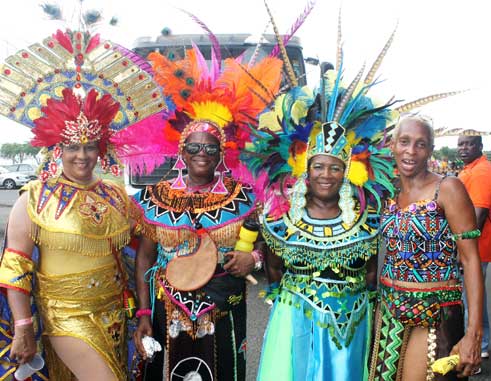 “TRIBE of Twel” dominated this year’s Carnival Parade of the Bands, picking up titles for Band of the Year, Section of the Year, Individual, Best Portrayal of Theme, and Best Designed Band.

The band, which consisted of core members from three bands – Rituals, St. Lucia Spirit and XS Energy – also placed third in the “Mas on the Move” category, and second in the Individual category (Sharon Tanner, “Xochiquetzal”).
The results were released at a press conference held in the Cultural Development Foundation (CDF) conference room yesterday.

Chairman of the Carnival Planning & Management Agency (CPMA), Lyndon Arnold, said there were no major incidents reported by the police during the two-day jump-up. He thanked all stakeholders involved for making the parade and the season an overall success.

Arnold said music played a major role during the season, especially soca tunes, many of which were released early in the season. He also underscored the high level of participation in the King and Queen of the Bands competition. Arnold believes that with the right amount of enthusiasm and support, the overall carnival product can experience exponential growth.

“It shows that if we all work together and take St. Lucian Carnival – all aspects of it: the music, the costumes and so on – it can deliver the benefits that we’re seeing,” Arnold said.