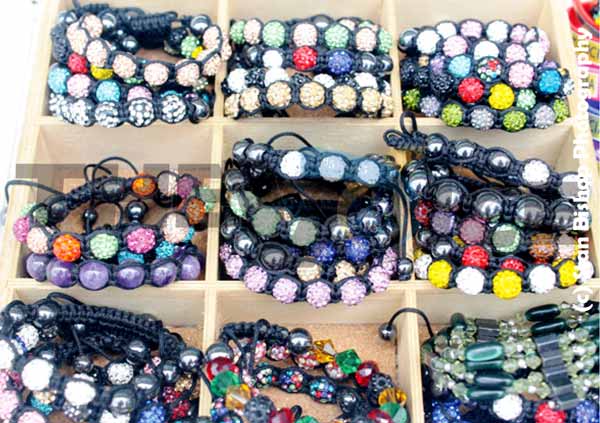 DUDLEY Alexander is just one of the many artisans among us focused on taking advantage of their creativity. He’s also one of many who seem determined to remain competitive so that they never find themselves on the breadline. That’s why you’d still find him threading seeds and making shambalas near his tray six days a week.

The 37-year-old has been making necklaces, bangles, earrings and pendants for the past eleven years. He uses basic raw materials such as local seeds, stones and shells. However, he also buys various imported materials to embellish and design the pieces. He recently added colourful shambalas to his impressive array of pieces.

Alexander, who lives at Sunbilt, Castries, said that during his childhood years, he saw firsthand how his relatives would thread the seeds that fell from the trees in Laborie where he was raised. He soon learned the craft from them, so much so that when he became a young adult and moved to Castries, he took up the craft seriously. After some initial positive feedback from customers, he decided to go into the craft full-time.

Alexander said business was booming for him in the early years, thanks especially to the many French tourists who frequented his sidewalk tray on Micoud and Laborie Streets. These days, however, business has slowed down a bit due to the dull economic climate and other people getting into similar business ventures as his. Nevertheless, he does have a backup plan to fall back on in such low periods.

“I still do my landscaping and plant ground provisions,” Alexander said. “These are things I did from way back. I believe in multi-tasking. But my craftwork pays me more because I get a lot of people coming to me saying they like my designs.”

For many years, Alexander had set up shop on the wall along the sidewalk opposite the Minor Basilica of the Immaculate Conception. These days, however, you can find him a stone’s throw away where he owns two wooden trays adorned with his neatly-crafted pieces.

Up until his interview with The VOICE this week, Alexander had no knowledge that as a budding entrepreneur, he can participate in trade shows and exhibitions to promote his business. Neither did he know that there are agencies such as the Small Enterprise Development Unit (SEDU) and St. Lucia Industrial and Small Business Association (SLISBA) who offer assistance to small entrepreneurs. He intends to take advantage of such opportunities as he has bigger plans for his small business.

“I’m looking to step up my business soon. I want to do a little carving and other stuff. I don’t want to be on the same level all the time. I want to multi-task my vibe. I’m also hoping to create pieces to go with the various holidays.” Alexander explained.

In an unfavourable economic climate where many Saint Lucians finds themselves beating the pavement in search of work, Alexander says he feels blessed just knowing that he is self-employed and can earn a living from his talents. He believes that the best blessings can come out of even the worst situations. His advice to budding and prospective entrepreneurs is that they remain focused, positive and business-oriented.