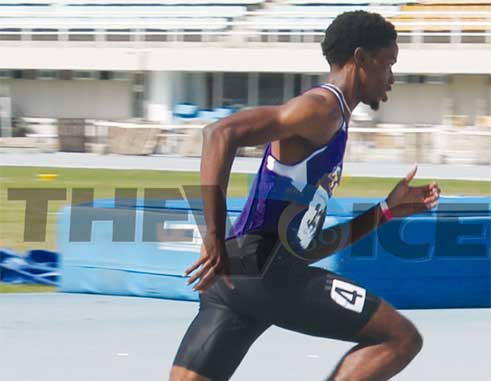 Only one new record set in National Track and Field.

IT can best be described as low key, the St. Lucia Athletic Association’s 31st. National Individual Track and Field Championships last weekend at the George Odlum Stadium in Vieux Fort.

For starters the performances of the athletes were nothing to talk about. In fact, only one record was broken the Youth Heptathlon where a new mark was set by 14 year old Julien Alfred of Survivors.

In the field events, men’s divisionAce Louis continued his good run of form in the High Jump, clearing 2.00m. ahead of Rockspurs teammate Daivon St. Prix, Abilene’s Mickey Ferdinand and Nightriders’ Walter Emmanuel, all of whom cleared 1.90m to share silver.

The ‘open’ shot Putt, which actually turned out to be a junior competition saw Zane Stephen from Pacesetters winning with 12.55m.

Louis went on to secure her second medal when she won the women’s Shot Putt. ToriaSeraphine was second, with Diana St. Ville completing the Gros Islet Secondary clean sweep.

Like Louis, Etienne came back strong to win the Javelin with a throw of 35.02 m. Lucien got her third silver medal with a distance of 24.10m. whileBannais with 20.68m. was third.

Danny Francois was a double gold medallist, winning the Shot Putt and Javelin in the Youth Boys category for Gros Islet. Christian Cenac was second in Shot Putt and Chris Cenac second in Javelin, both from Choiseul.

The versatile Choiseul athlete Shamalyn Albert was the women’s Heptathlon champion with a score of 4,653 points, a new personal-best mark despite having had just one personal record in the seven-event competition. The Heptathlon had good representation, with three teenagers including silver medallistGibba Edward of Elite, bronze medallistMarva Herman of Morne Stars and fourth-place finisher, Nickiada Nestor of Morne Stars.

There was also good competition in the juvenile ranks, Alfred of Survivors winning the girl’s age-group Heptathlon with 4,354 points.

In the sprint events on the track, Julius Morris on Montserrat Track Alliance did the double in the men’s races, winning the 100m and 200m. The 200m series was especially keenly contested and can best be described as scintillating with three of the four races being won by hundredths of a second.

Morris beat Rosen Daniel with a time of 20.64 seconds withCorneil Lionel taking third. In the women’s division, Hygenia George of Blazers won in 25.75 seconds, while Verlyn Taylor won the 100m in 12.38 seconds.

In the girls 400m, Kimani Alphonse of Pacesetters turned in a tremendous run to beat Allana Paul in 57.90 seconds. Paul of Morne Stars finished in 1 minute 00.66 seconds. Randy Serville won the boys race comfortably, giving Elite the gold in 52.07 seconds, well ahead of Christopher Medard from Rockets.

Samara Edward won the women’s division for Pacesetters in 1 minute 01.07 seconds and Daniel stopped the clock in 46.13 seconds to win the men’s race from Jonathan Celestin of Nightriders.

Road Busters Michael James won the men’s 800m in 1minute 53.52 seconds, just holding Choiseul’s Marbeq Edgar off at the line. Edgar left it till late to make a charge after running just behind the lead pack for over 500 metres, only to fall short by a hundredth of a second. Choiseul’s Aaron Lionel was a relatively distant third.