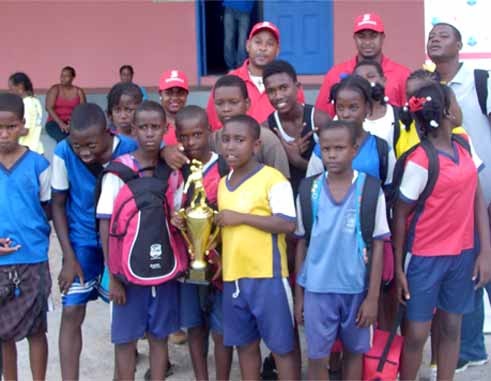 This was the second win by Augier Combined School in this annual event which was inaugurated three years ago. They won in 2013 and now in 2015.

Augier came out victorious after defeating Grace in an intriguing encounter, in which both teams thrilled the spectators with some impressive display of batting, bowling and fielding. Augier made 139 runs while Grace replied with 116 runs. The third place went to Blanchard Combined and fourth place to Vieux-Fort Primary.

Augier has now qualified to compete in the Annual Primary Schools’ Kiddy Cricket Tournament jointly hosted by the Ministry of Education and The St. Lucia National Cricket Association at Mindoo Phillip Park, Castries on Thursday, July 2 2015. Opening ceremony starts at 9:30 a.m. and matches from 10:00.

The top three teams were presented with trophies and all participants with tokens such as knapsacks, lunch-kits and water bottles.

In his remarks, Carol Henry, Kiddy Cricket Champion of Scotiabank said the bank had been the exclusive sponsor of Kiddy Cricket and the official Bank of West Indies Cricket since 2000. “This year marks the 15th anniversary of our Kiddy Cricket sponsorship and we are so proud to see how the programme has helped build West Indies cricket over the years,” Henry, Scotiabank’s Commercial Services Officer said.

He reported that kiddy cricket had grown to include 726 primary schools around the Caribbean with over 108,000 primary school students receiving regular after-school coaching from trained coaches. He added that in the last 15 years, over 750,000 children had passed through the programme.

“I hope this shows you that the next West Indian cricket star could be one of you. You have to keep up your training and follow what your coaches are teaching you because this is the first step on the path to bigger things,” Henry said.

“We would like to thank Scotiabank for the assistance they have given us…We trust that they will continue to do so,” Joseph said.

He added that the partnership between the district and the bank will go a long way in providing the students with the necessary skills which will enable them to play at higher levels.

Physical Education teacher of the Augier Combined School, Lester Justin, said he was elated by the outstanding performance of his school.

“I am not surprised we won the competition. I expected us to win because we train very hard,” he said.

He added that he expects the school to continue to do well in all the other competitions in the district.