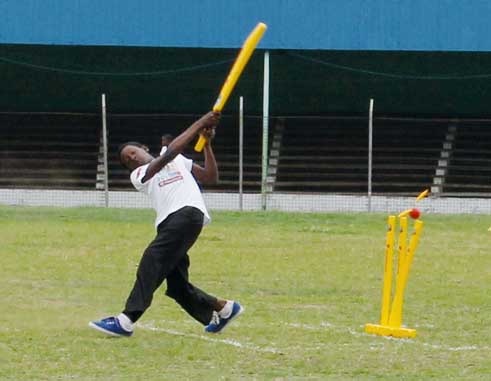 FOLLOWING their victory at the District 6 level last week Friday at the Phillip Marcellin Grounds in Vieux Fort, Augier Combined proved to the opposition that it was no fluke. They emerged champions in the 2015 Scotia Bank / WICB Kiddy Festival held at the Mindoo Phillip Park on Thursday.

In addresses delivered on the day Scotiabank representative Carol Henry said: “ I was present at one of the mini kiddy cricket festivals hosted by District 6 Committee on Friday 26 June and was on hand to witness seven schools vie for the right to be here. I was tremendously impressed with the display of the keen, competitive spirit and enthusiasm displayed by the seven teams which kept me engaged throughout the course of the tournament at the Phillip Marcellin Grounds. I saw excellent athleticism, stroke play and youthful exuberance that tells me the future promises exciting stuff”.

He continued, “The emerging winners from District 6, Augier Combined are here today as are the other winners from various Districts who also held mini festivals and I congratulate all winners on having made it to today’s finals”.

Scotiabank is the this year exclusive sponsor of Kiddy Cricket and the Official Bank of West Indies Cricket and this year marks the 15th anniversary of itxKiddy Cricket sponsorship. The results over the years are a source of much pride and satisfaction and we look forward to continuing this collaboration to future the interest of cricket in St.Lucia and the wider Caribbean”, Henry said.

Henry also noted that Kiddy Cricket has grown to include 726 primary schools around the Caribbean with over 108,000 primary school students receiving regular after-school coaching from trained cricket coaches. In the last 15 years, over 750,000 children have passed through the programme.

The Scotiabank representative said:. “The results speak for themselves as a number of success stories have been told about kiddy cricketers who went on to represent their individual island homes and the West Indies. At Scotia, we are extremely proud to see how many former Kiddy cricketers have been selected for the West Indies team in recent years. Kemar Roach, KraiggBrathwaite, Andre Fletcher, Darren Bravo, Jermaine Blackwood, Sunil Narine, Shai Hope, and Shane Dowrich; they all started out in Kiddy Cricket just like you and now they are playing for the West Indies, in the IPL and even right now in the CPL”.

Henry had some words of encouragement for the players when he said, “Some day you will equal or even exceed these achievements if you keep your eyes on the prize representing your island and ultimately the West Indies. And of course the economic benefits are certainly there; earn a good living from professional cricket. You could be the next West Indian cricket star by keeping up with your training and following your mentors, guidance, advice and coaching”.

She said: “This investment provides our students with the opportunity to learn the basic knowledge and skills of the game for continued play in the future.”