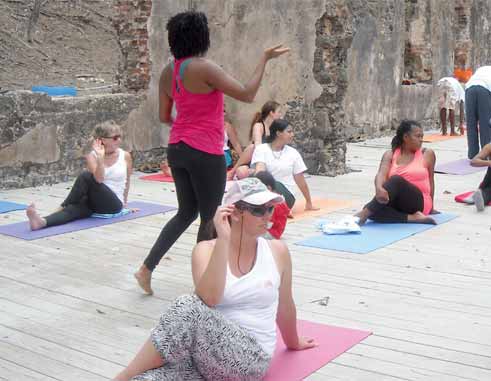 SAINT LUCIA together with 191 countries from around the world joined in celebrating the first ever International Day of Yoga last Sunday.

Tabled by Indian Prime Minister Narendra Modi during his address to UN General Assembly on September 27, 2014 the day is a celebration of the ancient practice which has been around for thousands of years.

It was subsequently approved by the United Nations General Assembly on December 11, 2014.

“Yoga is an invaluable gift of India’s ancient tradition,” Modi said at the time.

“It embodies unity of mind and body; thought and action; restraint and fulfilment; harmony between man and nature; a holistic approach to health and well-being. It is not about exercise but to discover the sense of oneness within yourself, the world and nature.”

According to UN sources an estimated 2 billion persons participated in this event around the globe with practices of Yoga asanas, pranayamas and meditations.

In Saint Lucia the event took place on Pigeon Island National Landmark with practitioners of Yoga from The Art of Living Foundation, Monetta’sSayana Yoga, Yoga on the Bay and members of the public. Also in attendance was the representative of the local St. Lucian Indian community Mr. Keith Compton and Dr.Maha, a doctor of Ayurveda. Despite the sun and intense heat, it was an enjoyable and informative event. The level of participation was encouraging and is an indication of people’s awareness of the intrinsic value of yoga.

“Yoga is something that can unite people across the globe, across nations, across religious divides. Everyone can come together with the spirit of togetherness. Yoga is not just about asanas , it is a state of mind where you have a sense of belongingness, responsibility for the whole planet, and a sense of connectivity and harmony. This is one thing which can unite and bring solace to people across the world. What we need is humanness, and humanness can blossom when people are free from stress ,tension and depression,” says Sri Sri Ravi Shankar, founder of The Art of Living who has been working for the spread of yoga for the past 35 years.

With many forms of yoga available e.gIyengar yoga, Astanga yoga, Hatha yoga, Vinyasa yoga etc..one can find the type of yoga most suited to them.