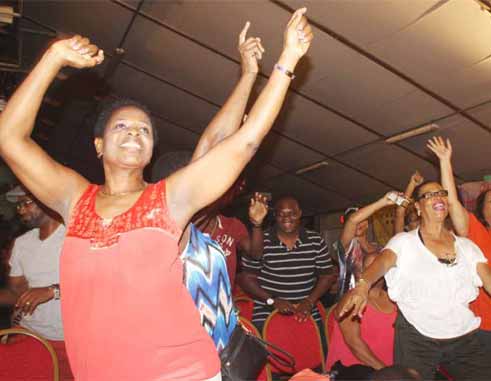 THE third calypso tent of the season turned out to be a charm for the St. Lucia Association of Registered Tents (START) last Saturday evening.

A favourable audience saw and heard quite an improvement from the artistes who graced the National Cultural Centre (NCC) stage for the Calypso Groovy Soca Fiesta.

The show came after two tent shows were hosted at the NCC in the weeks prior featuring calypsonians. This time around, however, the addition of the groovy soca element caused more jumping and waving.

Guest artiste and reigning Secondary Schools Calypso monarch, Lil Nick, got the proceedings underway in round one – the calypso segment — with his new song, “The Government Fat”, ostensibly gunning for a three-peat this year.

Round one ended on somewhat of a bad note when Menell was forced to cut her performance short due to heckling from the audience. She eventually returned to the stage, apologized and sang her song before intermission.

Newcomer Shemmy got things heated up in the second segment, followed by Sweet Kay, Nickler and Trish. The big soca guns, Alpha, Mongstar, Mysterio, Sedale and Arthur closed out the segment on a higher note. The soca vibes are sounding positive thus far and it’s always good knowing that multiple-title winner, Alpha, is back on the stage.

Lady Leen (“Suicide”) and Teddy Boy (“Sex Sweet”) opened the second calypso segment that featured Trinidadian calypsonian Explainer. Explainer’s set could have been a smoother one had he not taken on the hecklers who kept requesting their personal favourites.

Overall, though, last Saturday’s show proved that with the absence of big names – and talents – of Invader and Herb Black, drastic measures needed to be taken to fill that void. The soca element seemed to make up for it, though. It remains to be seen whether tent officials will keep this new format as they go into the quarterfinals stages.