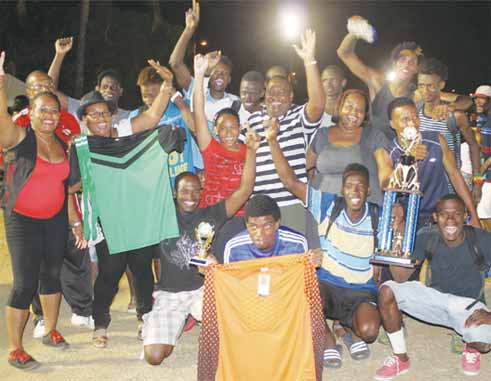 THE Plante’s Place Senior Football Competition in Dennery came to a fitting end on Sunday with two exciting encounters at the Dennery Playing Field in front of what can best be described as an appreciative crowd despite the opening of the Dennery carnival just a stone’s throw away.

Wisdom 18 Plus proved too much for former champions White House defeating them 4 – 0 to win the third place silverware and Piton Travel Young Stars emerged as champions with a clinical 1 – 0 win over arch rivals On the Rock Strikers.

At the half time whistle the scoreline was goalless in the first encounter, but on the resumption Wisdom 18 Plus stepped up to the delight of their many supporters on the sidelines when No. 6 GillanMathurin broke the dead lock in the 64 minute Eight minutes later No.7 Travis Meril doubled the score line for his team. No.17 LennisAugustin added more salt to White House wounds when he latched onto a loose ball just outside the box to push Wisdom 18 Plus further ahead in the 85th minute. Then No.12 Stephen Vidal struck in the 90th minute to seal the deal for the third place silverware and medal.

The much anticipated showpiece finals of the evening kicked off at approximately 7.30 p.m. between Piton Travel Young Stars and On The Rock Strikers with Referee Gordon Wilson in charge. During the first half both teams had fair in a fast paced encounter aided by a strong breeze blowing from the east, but despite all the fancy play on the square the teams created several scoring opportunities in front of goal only to leave the scoreline at the halftime whistle nil all to the dismay of their supporters.

However, after a goalless first half and the talk around of the dreaded penalty shootout, it was Piton Travel Young Stars which broke the deadlock in the 83rd minute after a powerful right foot long range shot from KerwinBissette which hit under the cross bar and fell right in front No.14 Junior Cox who converted from close range to secure the victory for PTYS on his birthday, to signal that the carnival had just began in the fishing village.