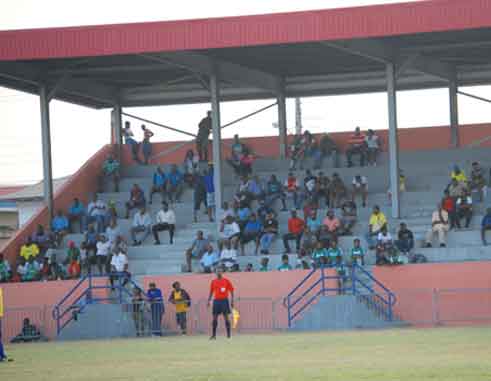 A former Youth and Sports officer of Vieux-Fort has called on the Vieux-Fort Facilities Management Committee to reduce the fees it charges for the use of the Phillip Marcellin Grounds.

Winston Lubin described the fees as “exorbitant, abominable and ludicrous”. He promised to play a vanguard role in agitating for a reduction, promising to leave no stone unturned in doing so.

“I will lead the charge in ensuring that the fees are reduced. I am very serious about it,” he said.

“Right now it cost me $500.00 to play a cricket game on the field. This cannot be accepted …This is a community playing field and not a national facility,” Lubin stressed.

He said it was better for the committee to sit with the various sporting organizations and negotiate a fee with them, which will not be out of their reach. Lubin said he is aware that there is a cost in maintaining the field, but the development of sports in Vieux-Fort must be taken into consideration when setting a fee.

“The fees charged will discourage the development of sports in Vieux-Fort. Sports need to be revived in Vieux-Fort, but for this to happen, the Vieux-Fort Facilities Management Committee needs to play its role,” Lubin said.

He questioned the committee’s management ability, calling on it to seek guidance from certain persons in the community.

“They should open up for suggestions from people who know better than they. There are people out there who are willing to assist them in managing the facility,” he said.

Lubin said the sporting community in Vieux-Fort has openly expressed dissatisfaction with the fees charged for the use of the field.

Commenting on the claims made by Lubin, Chairperson of the committee, Ricky Etienne, described the fees as “reasonable”, adding that what Lubin described as a maintenance fee is a usage fee.

“The fee for the use of the playing field is $350.00, but for other activities we have to sit and discuss the usage fee…” Etienne said.

He said that the $700.000 deposit which is refundable is to cover the security aspect of the facility and for any damages done to it, adding that the deposit depends on the type of activity being held.

According to Etienne, the time of the day an activity is held at the facility also has a bearing on the fees charged, because in some cases lights may have to be used which will add to the cost of managing the facility.

“We also have to water the grass on the field everyday…It is costly” he said.

Lubin, who made certain pointed comments in his interview with THE VOICE, had accused the Youth and Sports Officer of the community, Marcia Dolor, who is also a member of the committee, of not showing interest in the development of sports in the community. He accused her of behaving like a landlady and treating the sporting organizations as tenants.

However, Dolor declined to comment on these accusations, stating that she did not want to be embroiled in a “war of words” with Lubin.