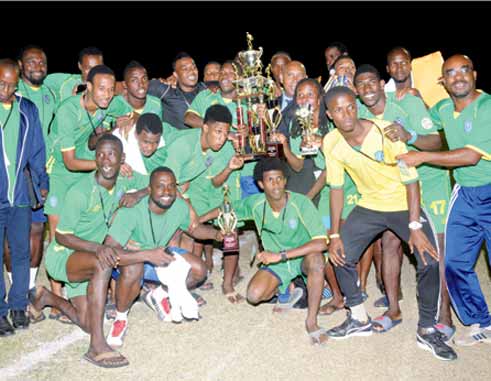 ST. VINCENT and the Grenadines are the new Windward Islands Men’s Football champions.

The Vincentians defeated Dominica 1 – 0 courtesy a Myron Samuel strike in the 22nd minute to end the tournament on 9 points at the Phillip Marcellein Grounds in Vieux Fort.

At a post match press conference St. Vincent and the Grenadines assistant coach, Westley Charles said: “We have been working really hard, and we have been getting a lot of training days in. But a couple of weeks ago we got a week and a half training camp, so the boys have been getting some quality work in. And every plan we put in, they executed it.”

The Vincentians now turn their attention to FIFA World Cup Qualifier next month.

On day 1, St. Vincent and the Grenadines beat Grenada 3-2, taking the lead for good late in the game on a Myron Samuel penalty conversion. They defeated defending champions St. Lucia 2-1.

In the opening match on Saturday, Grenada got goals in either half from striker Jamal Charles to send St.Lucia at the bottom of the points table. It was Grenada’s first and only win. Charles, netted in the second minute and then again in the 78th minute to seal the deal for his team.

At the awards ceremony the champions dominated the individual awards. Having conceded three goals in the tournament, custodian Winslow McDowall was handed the Golden Glove award for best goalkeeper. Samuel got the Golden Boot for most goals. George collected the MVP.