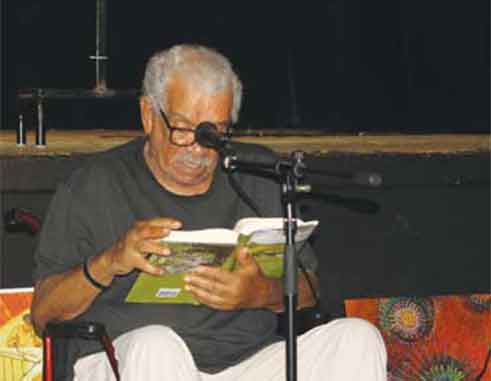 RENOWNED iconic painter, Sir Dunstan St. Omer, received a fitting farewell concert that he would have undoubtedly endorsed had he still been alive.

The concert was held last Monday evening at the National Cultural Centre (NCC) where over a dozen poets, musicians, dancers and members of academia paid tribute to the visual arts giant who passed away on Tuesday, May 5 at 87.

A modest audience showed up for the concert to hear and share in the upbeat and vibrant presentations honouring the man who designed the Saint Lucia flag 48 years ago.

Also in attendance was Sir Dunstan’s childhood and longtime friend, 1992 Nobel Prize-winner for Literature, Derek Walcott, who read a poem in tribute to his late friend.

Some of Sir Dunstan’s family members were also present and expressed appreciation for the efforts made to honour the artistic legend in such a special way.

A number of artists lined up their paintings along the front of the stage among some pieces painted by Sir Dunstan himself.

In his short message, Monsignor Anthony spoke of the many travails of Sir Dunstan, whose works and artistic prowess have left an indelible mark on many artists and Saint Lucians in general.

Sir Dunstan was buried yesterday following an emotional service held at the Minor Basilica of the Immaculate Conception. He is survived by his wife, Lady Cynthia, and nine children.