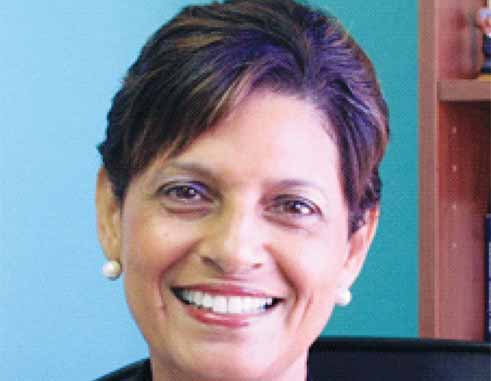 THE new Acting Principal and Pro Vice-Chancellor of The UWI Open Campus is Dr Luz Longsworth. She is a Caribbean national who was born to Venezulean and Jamaican parents and who lived and worked in Belize for many years raising two children. Fluent in Spanish and French, Dr Longsworth also holds a Doctorate in Business Administration in Higher Education Management from the University of Bath in the United Kingdom. She is also a graduate of The University of the West Indies where she earned her BA in French and Spanish and MBA (Marketing) degrees. She is the holder of a Master of Arts degree in Hispanic Studies from Queen’s University, Ontario, Canada

Dr Longsworth has over 25 years of experience in both academia and business in Jamaica, the British Virgin Islands (BVI) and Belize. As a senior administrator at The UWI, she has served in various posts at the Mona and Open Campuses, including Director of the School of Continuing Studies, Director of The UWI Open Campus sites, and her current post as Director of The UWI Mona Western Jamaica campus in Montego Bay, Jamaica. Dr Longsworth’s research includes leadership development, change management and organisational development and transformation. She is also a certified trainer in leadership courses for the internationally renowned John Maxwell Company and has participated in various consulting projects in the Caribbean and the United Kingdom.

Commenting on her new role, Dr Longsworth said, “As The UWI moves into a new era of growth and transformation to address the issues of becoming a truly global institution, the role of the Open Campus must now be pivotal in that transformative process. Its core strengths in online and distance delivery, as well as the very key role that the physical sites play in bringing The UWI to our communities across the region, must now be harnessed for the benefit of all campuses and hence for the ultimate benefit of an even more integrated and united UWI. Having been a part of its evolutionary phase, it is an honour to serve, no matter how briefly, to build a team not only within the Open Campus, but across The University and the region to begin this transformation which will successfully position the entire university as a key player in the 21st century’s global higher education landscape”.

Dr Longsworth replaces Professor EudineBarriteau who recently took up the post of Pro-Vice Chancellor and Principal of the UWI Cave Hill Campus.