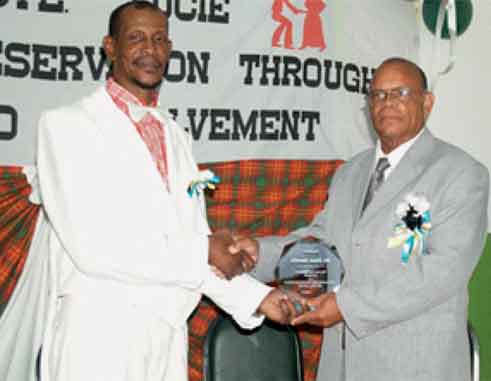 As a past member, and cultural activist, Norville was installed as the Patron for the Group on February 17, 2011, at its 25th anniversary celebrations.

At the installation Ceremony held under the patronage of Dame Calliopa Pearlette Louisy, St. Lucia’s Governor General, Norville was presented with a plaque to make his new honour official.

Norville’s sterling contribution to St. Lucia’s culture has made his a household name in the cultural arena. In the area of music, Norville was known to be a singer, a songwriter, a musician able to play many instruments his favourite being the banjo. His love for music prompted him to form a musical band called “Frank and the Lucians”. He also joined the choral group: “The Helenites”. Some of Norville’s most famous songs include: “Oui Nous DitSaVré”, “TiwéLanmen’w”, and “Ste.LucieSé Un JoliPéyi”.

His love for music and singing spilled over into his participation in the annual La Rose Festival. As an avid lover of this celebration he will surely be missed. St. Lucians will also remember Norville as a member of the Creative and Performing Arts Society.

“Frankie”, as some of the members of Les Danseurs Traditionnels de Ste Lucie affectionately called him, was knowledgeable in the folk dances of the island and was ever ready to teach them. His dance expertise was certainly not limited to the local folk dances. In fact, Les Danseurs Traditionnels de Ste Lucie will forever be grateful to him for his work in teaching folk dances like the Lancers, the Highland Scottische and Sweetheart Scottische.

After his installation as Patron of our group, Norville participated fully in the activities of Les Danseurs Traditionnels de. Ste.Lucie. He attended rehearsals, meetings and other activities and also assisted in the teaching of the dances especially at the group’s workshops. His continuous support throughout the years helped redefine our group. Norville assumed this subtle persona when making suggestions and presenting words of advice, a characteristic for which we will all remember and respect him. His contributions we’ll always cherish.

It has been noted that Mr. Norville’s presence at the functions of the Group has brought some prestige to the group as he was well respected in St. Lucia.

Mr. Norville fell ill in the latter part of 2014 and group members visited him at the hospital as well as at home in the hope that he would recover.

Mr. Frank CyprianiNorville passed away on Wednesday April 8, 2015. Members of Les Danseurs Traditionnels De Ste.Lucie, like all St. Lucians, mourn the loss of this cultural activist. He will be greatly missed by the group. May he rest in peace!