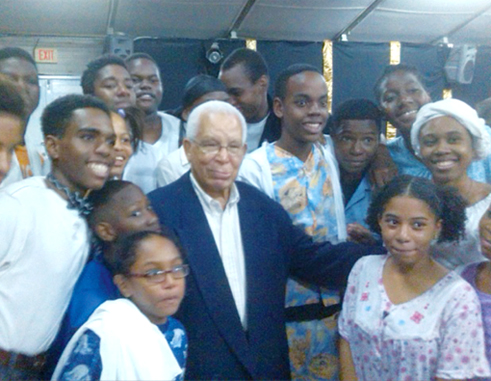 IN a few days’ time some of Saint Lucia’s most talented dramatic performers will take to the stage of the newly refurbished National Cultural Centre to present one of the most revered plays by one of the island’s most sterling playwrights – Roderick Walcott.

Walcott known affectionately around local art circuits as just “Roddy” wrote a total of 32 plays in his lifetime. The most popular of those being “Chanson Marianne” that has made it to stages around the world. To this day, 15 years after his death, Walcott has a host of plays yet to see the light of day, far less the hot lime lights of the stage.

This musical, written by Walcott in 1958, is full of comedy and is centered on the daily life of a fictitious country Esperance. The music was written by renowned local musical composer Charles Cadet who was recently honoured for his contribution to the development of the island’s music.

Local Cultural Activist June Frederick, an avid supporter of the Arts, felt it was necessary to alert young Saint Lucians of the genius that was Roddy Walcott. She was fearful that his talent and his many works would become lost, buried in the annals of the island’s history and his name would be forgotten. In an effort to ensure that this did not happen, Frederick made a commitment to present on local stages one Walcott play a year for the next five years.

As a pilot endeavour, she is presenting this year on May 27 and 28, Roddy’s “Legend of Tom Fool” that tells of a village idiot’s story of rags to riches; in an intellectual sort of way.

The beauty of this idea is that the play will be presented and acted out by the young people of Saint Lucia. *What better way to teach them and to familiarize them intimately with the work of Roddy Walcott? I am hoping that they will take it in and will be able to pass it onto their peers and eventually to youngsters after them. In that way Walcott’s work will never die. It will be passed down through the generations and this great man of Saint Lucia will be remembered and his work will live on.” Frederick said.

The play is being presented by “Kiddicrew Theatre” a theatre company of young people. Legend of Tom Fool will be presented by a cast of 16 youngsters, aged 11 to 19 years and is being directed by a blend of young and experienced Directors – Michelle Theobalds and Stacy Giddings with some input by veteran Director Kendel Hippolyte, the Company’s dramatist.

“And this is another focus of Kiddicrew Theatre. We are highlighting the talent of not just the performers but of every key contributor of this production; therefore we are featuring the talents of young and upcoming Saint Lucians in their fields. In lighting we have Martha Mc. Lennon, dance choreography -Nicole Samuel, stage design – Shane Charlery along with veterans like Jericho Hudson on sound, Kerwin Peters prop and set builder, Zenith Williams costume maker.

‘What I am trying to do also, in an effort to truly help develop the artform and the skills of talented young people, is to ensure we have understudies to the main players; every year, we will feature a new director, dance choreographer and so on “ said Frederick.

She added that the young people have received guidance from some of the island’s top Artistes in their respective fields such as Kendel Hippolyte in theatre direction, Jason Joseph voice training and Barbara Cadet who has arranged the original music by her cousin Charles Cadet.

The public is being urged to come out in large numbers to support the art, Walcott and the talents of the young performers and production crew. “Legend of Tom Fool” will be presented on the stage of the National Cultural Centre for two days only, May 27 and 28. Curtains go up at 7:00 p.m. sharp.