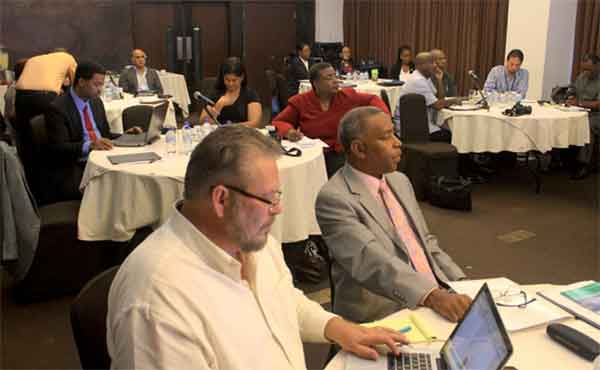 Political Will Still Lacking, Many Say.

THE quest to make the CARCOM Single Market and Economy (CSME) become something that the region’s people recognize as a “living, breathing thing” and not just a theory, was the crux of a major two-day workshop held in Trinidad last week.

The workshop was hosted by the CARICOM Secretariat with the assistance of the European Union 10th EDF, and targeted newspaper editors from across the region.

Just over a dozen newspaper editors attended the workshop held at the Carlton Savannah Hotel where they were given background information as well as updates on the region’s push for integration.

Also making a special presentation was Honourable Madame Justice Maureen Rajnauth-Lee, the lone female judge on the Caribbean Court of Justice (CCJ), whose appointment was made about a month ago.

Many of the newspaper editors, cited inconsistencies and lack of political will as being key factors militating against the CSME system working at its best. However, Justice Rajnauth-Lee said the contentious issue of whether territories should replace the Privy Council with the CCJ as their final court of appeal needs to be taken into context, one that embraces commonality in culture.

“Despite the fact that we’re separated by water, we’re all pretty much alike when it comes to the fact that as a people we need justice,” Justice Rajnaugth-Lee said. “In my view, we need our own people to administer that justice.”

Justice Rajnauth-Lee added that the CCJ breathes life into the Revised Treaty of Chaguaramas, ensuring that regional integration operates to improve the lives of the citizens of the Caribbean. To date, she said, the CCJ has delivered 18 decisions in its original jurisdiction.

The CJJ in its original jurisdiction interprets and applies the Revised Treaty of Chaguaramas for Antigua and Barbuda, Barbados, Belize, Dominica, Grenada, Guyana, Jamaica, Saint Kitts and Nevis, Saint Lucia, Saint Vincent and the Grenadines, Suriname, and Trinidad and Tobago.

Justice Rajnauth-Lee cited a number of cases where the CCJ has been instrumental. She singled out the ShaniqueMyrie case where Myrie, a young Jamaican woman, took the Barbadian government to court. Myrie claimed that she was subjected to a body-cavity search in unsanitary and demeaning conditions on March 14, 2011 before being detained and deported the next day to Jamaica. She claimed that immigration authorities in Barbados used her nationality as the basis for denying her entry and subsequently deporting her. In October 2013, the CCJ ruled in favour of Myrie and the Barbadian government was ordered to pay Myrie US$35,000.

Rajnauth-Lee said the CCJ has also been called upon to intervene on matters of trade and cited the case of Trinidad Cement Limited (TCL) and subsidiary TCL Guyana Incorporated (TGI). In August 2009, the CCJ ruled that Guyana was in breach of the Revised Treaty of Chaguaramas by failing to maintain and implement the Common External Tariff (CET) on cement entering the country.

While many CARICOM territories committed to the CSME idea in 2006, stakeholder buy-in at both the public and private sectors has been lackluster. At its core, the CSME aims to realize the following:

Many participants at last week’s workshop pointed to the successes that the sub-regional grouping, the Organization of Eastern Caribbean States (OECS) has been able to realize despite coming into existence eight years after CARICOM did in 1973.

Not unlike the growing sentiment being expressed among citizens in the region, participants felt that while regional treaties can work for the greater good, the political will in each territory is lacking. Many people believe that while many politicians sign on to regional treaties, their priorities rest with domestic issues. As such, the CARICOM Secretariat believes the media can play a more effective role in getting the integration message across to the masses in a more palatable form.