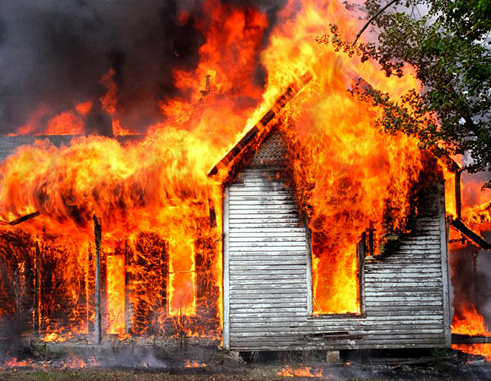 NO amount of precautionary advice seems right enough for many citizens when it comes to securing their property and person. In an age when everyone proudly proclaims that they live, eat and do whatever else according to their rules, rhyme and reason seem secondary, if not non-existent. Nevertheless, whenever a house burns within a community, we all suffer.

Of late, there have been far too many house fires spread across the island, especially in the north. For whatever reasons, people seem to be losing their homes to conflagrations that erase every bit of possession they worked many years to acquire. At the extreme end of all that is lost are lives that – unlike worldly possessions – cannot be replaced. Two children and an adult perished just this month when a mysterious fire razed a house at Chase Gardens. It’s already hard losing possessions in these trying times let alone losing loved ones.

There seems to be a common denominator here: that people are not following the safety precautions the fire service reiterates on the media ever so often. In fact, while some agencies have a knack for being reactive to situations, the fire service has and continues to take proactive measures to prevent fires getting out of control and leading to loss of property and lives. Whether it’s through simulation exercises and other sessions they conduct, fire officials keep that message burning. Many of us, I’m sure, miss that message because we immediately flip the television channel for a juicier story.

As a citizenry that demands that its intelligence not be insulted, we must endeavour to heed crucial advice when it’s being given. No one person has all the answers to all the situations that affect us collectively. That’s why it’s important that if the fire officials urge us to not spark bush fires close to dwelling and other property – especially during a drought season — we need to heed such advice. The fact that we own our homes does not give us carte blanche to cause someone else’s to be destroyed through our selfishness and recklessness.

Quite often, recklessness is the cause of many house fires. That pesky neighbour who thinks he has the right to burn whatever he pleases on his land, giving scant regard for the choking smoke and burning flames that inconvenience those living next door. Those homeowners who don’t see it fit to make a complete sweep of their homes to see that all switches are turned off before they leave their homes. Smokers dropping their lit “cancer sticks” anywhere they please after they would have sucked out enough nicotine. People leaving pots and pans on lit stoves to rush to the mini-mart to pick up a few items. People leaving lit candles and their children locked in houses to run out on errands. People having haphazard wiring in their homes because they’re too cheap to hire an electrician.

These are just some of the common factors that lead to house fires that place undue stress and burdens not only on those who lose property and/or loved ones but those who must now chip in to help those who lost much put their lives back together. It’s hard enough for us to stay above water managing our own households let alone assisting fire victims. But we’re charitable Saint Lucians, anyway, so we help each other out.

Of course, there are cases where arson is involved; where people get back at adversaries by reducing their dwellings to ash. This is definitely not the way to deal with disagreements. I know of cases where neighbours have threatened to burn other neighbours’ houses. In many cases, only a few feet separated those houses! I think the best way to solve such rivalries is to throw water and fertilizer on your neighbours’ hibiscus and ginger lilies as opposed to sending their houses — and probably yours, too – up in smoke.

People, we really need to be serious enough to at least entertain a high level of commonsense that can consequently save us from incalculable losses. In the same manner many of us are expected to give generously to help fire victims pick up the pieces and move on, people need to follow good advice that prevents them from becoming fire victims in the first place. We might not all agree on everything all the time, but being homeless is a situation we should all avoid finding ourselves in.

Late last month, I stood and watched fire officers quell a house fire at La Clery just about five minutes’ walk from where I live. The house was reduced to black ash by the time the water soaked into what was once a shelter for a family. A nearby house was scorched and the man who lived in the scorched house told me he was heartened that his house was not consumed by the fire. I’m sure he has taken fire safety to another level since that narrow escape.

If you asked me, anything unfortunate that happens to someone else can happen to us. Any story or situation that unfolds before us is meant to teach us something. While it’s understandable that life happens to us even if we’re busy making plans, not having planned for worst-case scenarios can really cost us in the end. It’s about time those news items about another house fire takes the backburner for a change. It’s about time that we also treat fire as a master by giving it its due respect and not simply a servant we wished we had treated better.