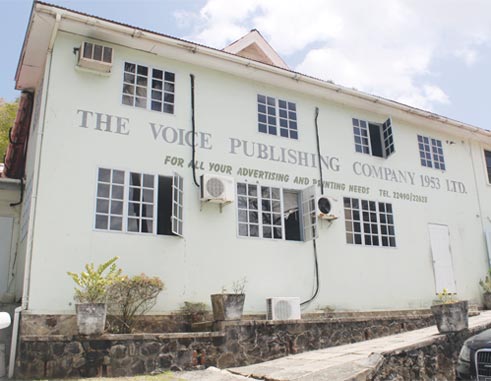 IN the history of the press in the Eastern Caribbean, The VOICE holds an enviable position. It is the oldest newspaper in the sub-region, and one of the oldest in the entire Caribbean.

In fact, based on our research the only other newspaper in the English speaking Caribbean that we can identify as being older is the Jamaica GLEANER, founded in 1834.

The VOICE is also the second oldest company still operating in St Lucia. The oldest is Minvielle and Chastanet which celebrated its 150th. anniversary last year. The two companies share the unique distinction of straddling across three millennia

THE VOICE OF ST. LUCIA, as it was known originally, first appeared on the scene of January 24, 1885. The Barbados ADVOCATE was started a full decade later, the Dominica CHRONICLE in 1909 and the Trinidad GUARDIAN in 1917.

There was another THE VOICE before us, however, which was started in 1877 by one Elwin Bennett and published weekly. But after changing hands four times, that paper ceased publication on January 1882.

The founder of THE VOICE OF ST. LUC IA was an Irishman, Robert George Mc. Hugh who had become one of St. Lucia’s most patriotic citizens. He retired early from the civil service for the express purpose of entering the field of journalism,

At that time in the 1880s, the idea of a federation comprising St Lucia, St Vincent, Grenada and Tobago was being mooted and McHugh started THE VOICE OF ST. LUCIA with a view to fighting the idea. In fact, in his first editorial, he set forth the agenda of paper in very plain language:

“We wish to state most emphatically and once and for all, that this newspaper has been started in the interest of no class or clique, but if possible, to unite all classes and destroy all cliques; not to advocate any particular set of opinions, but to give an opportunity to every man and woman in St Lucia, in having their say in public matters generally and especially to express their opinion with respect to the proposed confederation of St. Lucia with St. Vincent, Grenada and Tobago under one government who, as well as all their chief officials, is to reside in Grenada……..

“There is another and less important function of a newspaper which is to inform its readers at home and abroad, and to assist them in forming an opinion on such matters of general interest as may from time to time arise.

“Acting up to our duty in this respect, we have to state clearly that, looking into the question of Confederation from whatever point of view, we can see nothing good for us nor for anybody else in it…”

But how times changed. In later years THE VOICE OF ST. LUCIA would become a vigorous campaigner for Caribbean integration, including the federation of the West Indies which collapsed in 1962 after four years and for the various attempts to unify the small islands of the Eastern Caribbean which never materialised. In the absence of any success along these lines, THE VOICE OF ST. LUCIA supported constitutional advancement for the island which brought associated statehood in 1967 and full independence 12 years later.

Five years after its launching, THE VOICE OF SAINT LUCIA carried its first engraved banner head that featured the island’s motto: “Statiohaudmalifidacarinis” (“A safe anchorage for ships”). Later, the paper adopted the words of John Milton as its watchword: “Give me the liberty to know, to utter and to argue freely, according to conscience, above all liberties”, which appeared over its editorials for decades.

The original masthead of the newspaper has undergone many changes in presentation over the years culminating in the renaming of the paper in 1977 when it became simply THE VOICE and THE WEEKEND VOICE and with the declaration as “The national newspaper of St. Lucia.

Today, The VOICE is still the leading newspaper in St Lucia, a position it has never surrendered in all its 130 years, and that in itself defines the historical context in which the paper will always be seen.