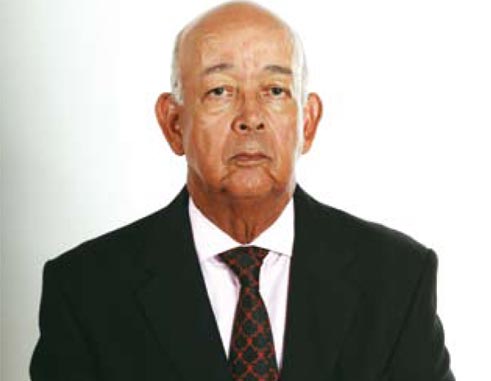 MICHAEL B.G. GORDON, Q.C., M.A., C.B.E., is the Chairman of the Board of Directors of The VOICE Publishing Company. A former Justice of Appeal of the Eastern Caribbean Supreme Court, he was educated at St Mary’s College, St Lucia and Ley’s School and Cambridge University in the United Kingdom. He heads one of St Lucia’s most respected law firms, Gordon and Gordon, started by his father, the late Sir Garnet Gordon which is now in its second generation. As Chairman of The VOICE Publishing Company (1953) Ltd, his legal profession is an asset to the operations of the company.

LYNDELL A.G. GORDON, M.A. (Cantab), a Civil Engineer is Managing Director of The VOICE Publishing Company. He was educated at St Mary’s College, St. Lucia, Munro College in Jamaica, Ley’s School and Emmanuel College, Cambridge University in the United Kingdom. His professional qualifications enable him to make invaluable contributions to the general operations of the company and to its technical requirements in particular. He masterminded the renovation and expansion of the existing “Odessa Building” at Darling Road, Castries, which currently houses the VOICE plant and premises. As an engineer, he worked on several major construction projects in St Lucia including the Morne Education Complex, Pointe Seraphine, the Hess Schools, the Castries Harbour, Malabar Hotel (now Rendezvous), La Toc Hotel (now Sandals). Cariblue Hotel (now Le Sport) and Coconut Bay Hotel in Vieux Fort.

THOMAS GORDON, son of Michael Gordon is the Business Manager of The VOICE Publishing Co. He holds a degree in Visual Communications. He describes his 12 years at the establishment as “a tremendous experience” and although working in a family business is complex and comes with its challenges, but this has not stopped him from rising above the many struggles and achieving major successes like the launching of the popular Yo! Magazine which focuses on making a positive impact in the lives of young people across the island, including the staff of the magazine itself.

VILAN EDWARD, Secretary to the Board of Directors joined the company from Coopers & Lybrand in 1993 as the Assistant Accountant. In 1997, he was promoted to the post of Financial Controller. Edward possesses a wealth of experience in the fields of Accounting and Auditing but within the organization his managerial skills are multi-faceted and extend to the areas of Production and Human Resource Development.